by Tyler Greer
Valve-in-valve treatments are becoming more necessary as patients get older and outlive their original replacement heart valves. 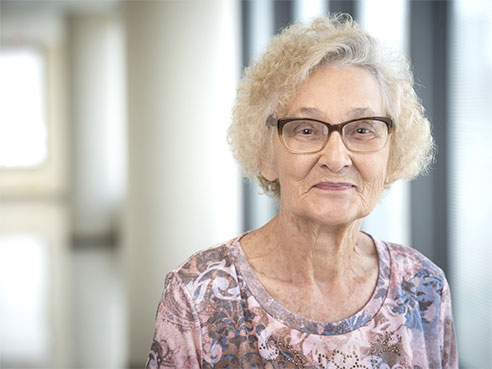 For 82-year-old Dorothy Moore, staying active and independent has been a way a life.

Whether it is gardening, cutting her grass or washing her car, she loves to be outside, and she loves to work.

Moore, an Atmore resident, also knows what it is like to have heart problems. She had a valve replaced in 2004 after an incident in which she blacked out walking to her car. Moore knew she had a heart murmur at the time, but she had never had any issues with it that slowed her down until her blackout.

This time, however, was different. She could feel herself slowing down week by week. She eventually began experiencing shortness of breath and would often have to sit down just trying to get across a room.

Moore’s doctors sent her to the University of Alabama at Birmingham, where physicians recommended a valve-in-valve transcatheter aortic valve replacement. The noninvasive procedure is used for high-risk patients who have had previous tissue valve replacements.

“This type of procedure, while not yet approved by the Federal Drug Administration, has almost become necessary because patients are getting older and outliving their replacement heart valves,” said James Davies, M.D., chief of the Section of Adult Cardiac Surgery. “Over time, these artificial valves that are made of animal tissue wear out, becoming narrowed, leaky or both. This is a technique that is very useful for previous valve replacement patients who are too high-risk for open-heart surgery.”

Moore had the procedure at UAB Hospital on April 27 and was discharged from the hospital three days later. She went to her son Glenn’s home in Alabaster for a month, in part so he and his wife, Dianna, could watch over her and monitor her recovery.

“She had her surgery on a Monday morning, and I think she could tell a difference at 4 p.m. that afternoon when they got her out of her bed and sat her up in a chair,” Dianna said. “It has been just an amazing thing to see. She’s breathing better. Her appetite got 100 percent better. It was quite a transformation from where she was.”

To perform the procedure, surgeons go through the groin or the best access site they can find to replace the old valve without taking it out and without using the heart-lung machine. This means the patient is not required to have his or her heart stopped while the new valve is put within the old one.

“The procedure was really rather comfortable, all things considered,” Moore said. “Dr. Davies told me the risks, the dangers, just like there are with any surgery. I understand that’s part of the deal, but I wanted to try anyway. Fortunately it worked, because I can tell a big difference. I’m doing great. Everyone here at UAB was just terrific — nothing but the best.”

Moore was most looking forward to something many might not when she got home to Atmore.

“Cutting grass,” she said. “I actually cut the grass a couple of weeks before I came up here for my procedure, but that was on a riding lawn mower. That doesn’t really count.”