by Tyler Greer
James Landis’ personal cardiologist says his 88-year-old patient’s heart went from roaring like a freight train to humming like a fine-tuned engine after procedure. 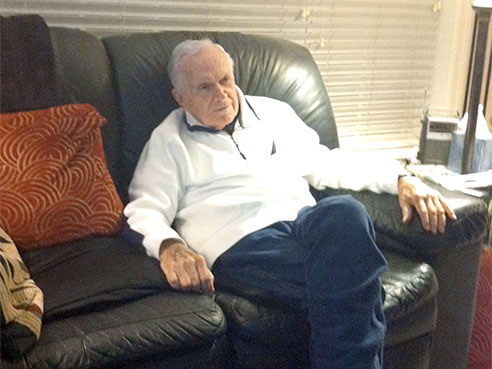 James Landis knows all about open-heart surgeries. The 88-year-old Leeds resident has had two of them.

“I had my first one 15 years ago for three bypasses,” he said. “The second one was for four bypasses. They open up your chest and probe through the valve to fix those things, and doctors think that’s what led to my other problems. You can’t blame anybody for that, though. They were doing what was best at the time.”

What Landis developed in recent years after those surgeries was mitral regurgitation, which is the most common type of heart valve insufficiency. The transcatheter MitraClip therapy is a groundbreaking treatment for the condition, and it is the only minimally invasive treatment available for high-risk patients like Landis. UAB physicians began performing the procedure in 2014.

“The MitraClip is the only device that has been effective in treating severe mitral regurgitation apart from open surgical repair or replacement,” said Oluseun Alli, M.D., director of the UAB structural heart program. “Open surgical repair or replacement is still the standard of care for patients who can undergo open-heart surgery, and the MitraClip is approved for use in high-risk surgical patients like Mr. Landis.”

Landis’ chief symptom was common of many valve issues — he could not seem to catch a breath.

“You always feel like you’re out of breath,” he said. “It was hard to walk across the room without having to sit down and rest at least once. It got to the point where it was hard to look at the TV just because it was that hard for me to breathe.”

Mitral regurgitation, which is progressive and life-threatening, occurs when the leaflets of the mitral valve do not close completely, causing blood to flow backward and leak into the left atrium of the heart during the cardiac cycle. The heart then has to compensate to provide adequate blood flow, which causes the left ventricle to increase in size. That causes the heart to work harder, and can raise the risk of irregular heartbeat, stroke and heart failure, which can be deadly.

The MitraClip enables UAB interventional cardiologists to deliver the clip through the femoral vein in the groin to the affected area along the mitral valve within the heart. Once there, the cardiologist delivers the clip, which attaches the mitral valve together to create a double-barreled orifice.

“We pull the edges of the two leaflets of the valve together using the MitraClip,” Alli said. “The valve leaflets become fused together, with creation of a double-barreled valve orifice with two holes side by side that allows the blood to go forward but prevents it from coming backward.”

“I felt better almost immediately after the surgery,” Landis said. “I’ll be 89 in September, and I must say, this has just been fantastic for me.”

Marc Ellis, Landis’ stepson, says when Landis returned to the care of his primary cardiologist after the procedure, he was pleased with what he saw and heard.

“His cardiologist said his heart now sounded like a finely tuned engine,” Ellis said. “He said it was roaring like a freight train before his procedure. The whole experience was just amazing to us. We couldn’t believe he was able to go home so fast and improve so quickly after the procedure.”