Meet a family bound not by blood or name, but by their kidneys in the world’s longest living-donor kidney transplant chain. Discover how science and human kindness come together to save lives. 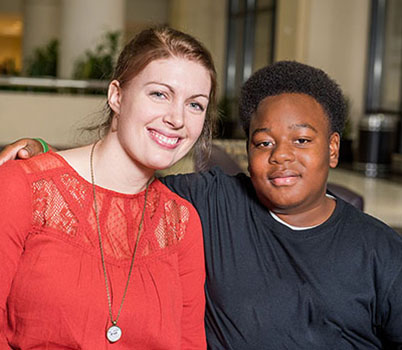 Chalice Howard and Levon MadisonChalice Howard is a twentysomething preschool teacher now living in Charleston, South Carolina. Levon Madison is a 16-year-old high-school student from rural Pine Level, deep in the Alabama Black Belt. At first glance, they wouldn’t seem to have much in common. But two minutes after they met, Madison’s mother told Howard, “You’re part of our family now!”

That’s because Madison and Howard do, in fact, share something: Howard donated one of her kidneys to Madison, who was born with a disease that caused his own kidneys to deteriorate, as part of the UAB Kidney Chain.

Howard “did something I thought nobody would do; she gave my son a chance at a normal life,” says Elaine Madison, Levon’s mother.

“I feel like the lucky one,” Howard says. “It’s amazing to be able to help set ‘reset’ for a kid who has suffered for 15 years. And it’s crazy how much I have received from meeting Levon and his family and beginning a friendship that will last forever.”

“We talk all the time,” Elaine Madison adds.

Multiply their relationship about 100 times over, and you begin to sense the magnitude of the UAB Kidney Chain, a linked series of surgeries that, after more than two years, holds the record as the longest living-donor kidney transplant chain anywhere in the world. Howard and Madison’s extended family includes 56 donors and 56 recipients — a total of 112 men, women, and children from 11 states—each with a unique story and background.

“Donors can remain anonymous, but some choose to meet the recipients, and it’s always a very powerful moment when they do,” says chain coordinator Jayme Locke, M.D., surgical director of the UAB School of Medicine’s Incompatible Kidney Transplant and Kidney Paired Donation programs. “People who might never have become friends, even if they live in the same town, feel like they’re part of one big family. They connect and keep up with one another long after they have left the hospital.”

Two things make the UAB Kidney Chain possible: medical science and selfless generosity. In a paired transplant chain like this one, the family or friends of recipients give a kidney to another person in need — often total strangers — on behalf of their loved one. They’re practicing the “pay it forward” concept on a lifesaving scale.

So Contessa Terry, of Moulton, Ala., who wasn’t a transplant match for her father, Glen Peebles, instead donated a kidney to Price Johnson, from Oxford, Miss. She gave on her dad’s behalf after Peebles received his own new kidney from another donor. “Instead of helping one person, we’ve helped two,” Terry says.

Then Johnson’s friend Laura Lee offered her kidney, which went to Bryan Howard (no relation to Chalice Howard), from Prattville, Ala. Howard joined the transplant waiting list knowing that he might stay on it 12 to 15 years because of his blood type. Thanks to the kidney chain, he had a new kidney in just a few months and was up and walking two days after his surgery. Meanwhile, Howard’s stepmother, Maria Howard, continued the chain with her own donation.

Bryan Howard keeps in touch with Lee, whom he calls his “kidney sister.” In fact, they discovered other ties. “I used to live in Mississippi, and I ended up knowing her best friend,” he says. “It’s a small world.”

One unique aspect of the UAB Kidney Chain is the number of donors who have no loved ones receiving transplants or connections to anyone in the chain. These altruistic donors—nine so far, including Chalice Howard—volunteer a kidney simply “because it was an opportunity to bring others along on this journey,” Locke says. “That sacrifice showcases a sense of community here in the South that is different from anything I have experienced elsewhere. They have allowed us to keep this chain going.”

In fact, it was an altruistic donor who launched the history-making chain in December 2013. Paula Kok, of Pelham, Ala., approached UAB with the possibility of donating a kidney to someone in need, despite not having an intended recipient. She knew firsthand the unsettling feeling of relying on a stranger to save a loved one’s life. Years earlier, her husband had needed a bone marrow transplant, and none of their family or friends were a match. “I felt as if the Holy Spirit was telling me that I should donate a kidney so that someone else would not feel that helplessness,” Kok says. “I could be someone else’s stranger.” Her kidney saved the life of Lornette Stewart, of Shalimar, Florida.

Chalice Howard also felt a personal and spiritual pull toward donation. “I believe deeply that as the recipient of a lot of generosity, I need to be generous toward those in need,” she says. “I never felt nervous about the surgery; I had total peace.”

A lot of complex science has helped donors act on their generosity and forge new links in the chain. UAB is home to the South’s leading incompatible kidney-transplant program, which makes transplantation possible between some donors and recipients who otherwise would not match.

Many transplant programs require a completely compatible match, and some donor-recipient pairs in the kidney chain are compatible matches. But UAB has the ability to make matches when pairs are incompatible due to differences in blood group or tissues. Pretreatment desensitization, which may include removing reactive antibodies from the recipient’s blood, using drugs to lower numbers of reactive immune cells, or reducing the ability of immune cells to respond and proliferate, overcome those differences and allow for the survival of an incompatible kidney. UAB’s combination of desensitization with paired donation is unique in the Southeast, and its partnership with Children’s of Alabama makes it the only program in the Deep South to offer living-kidney paired donation to recipients younger than 18.

“Several therapies used around the world to prevent transplant rejection were first offered to UAB patients,” adds Robert Gaston, M.D., executive co-director of UAB’s CTI. “The goal of our current research efforts is not just success in preventing rejection, but also identifying treatments that allow transplanted kidneys to last the full lifetime of the recipient.”

“UAB has become a national leader in kidney transplantation since performing our program’s first kidney transplant in 1968,” says Devin Eckhoff, M.D., director of UAB’s Division of Transplantation. “Our kidney program has done more living-donor transplants than any other program in the United States since 1987, and it is one of the three largest kidney-transplant centers in the nation. Our experience in performing kidney transplants from living donors ensures the highest level of care and better outcomes for our patients—both kidney donors and recipients.”

The UAB Kidney Chain continues to grow, with more transplants planned for the coming months. The success of the chain and of UAB’s Incompatible Kidney Transplant Program offers hope for the more than 100,000 people in the United States waiting for a new kidney—including more than 3,700 in Alabama, which has the second-largest number of candidates on the list. Currently, there are only enough donor kidneys for 11,000 transplants across the country each year. More than 15 percent of people on the waiting list will die before they receive a transplant.

More living donors volunteering their kidneys can help put a dent a those daunting numbers, but additional efforts at the national level could ensure that more transplants take place, Locke says.

“Chains like this one have the potential to be an incredible game changer,” Locke says, but it makes “intuitive sense” that all kidney transplant centers collaborate on one national program “so that patients realize the full benefit of what’s available to them.” Locke envisions a database including all paired kidney donors from each center, including both compatible and incompatible patients. “There is huge strength in numbers, and if we can encourage donors and recipients to participate in paired kidney donation, then we can gain things by participating in exchanges,” she explains. “We can find a younger kidney for a recipient, or even find another perfect match, and all of those things can benefit our patient population.

A national program “could optimize living kidney donation in this country in a way that we have never been able to do before, and I think we can actually begin to make a significant dent in our waiting list,” Locke says.

She also would like to see UAB create a fund to help willing donors handle costs not covered by medical insurance—including travel expenses and the costs of spending a couple of weeks away from work. Supported by philanthropy and modeled after the National Living Donor Assistance Program, such a fund would “facilitate the ability to donate without incurring a personal penalty,” Locke says.

In the name of love

Locke pursued a career in kidney transplantation because the field “affords boundless opportunities for innovation and discovery” and because the patient population is often very sick. “To look in someone’s eyes and see hope restored is an amazing feeling,” she says.

“This chain really showcases the power of the human spirit in every aspect,” says Selwyn Vickers, M.D., UAB senior vice president for medicine and dean of the School of Medicine. “Every one of these individuals possesses special gifts — determination, love for their fellow man, a thirst for knowledge, and passion. These are precious gifts that encapsulate the very essence of life. Our entire staff is honored to serve these families and be a part of each of their journeys.”

“From the beginning, this chain has represented an incredibly profound sense of community and commitment that is truly unique,” Locke says. “Every person involved has wanted to give back and give to others, which is why we have been able to help people beyond what many chains in this country and around the world have ever been able to do.”

Price Johnson, looking around at his growing family of donors and recipients, sums it up this way: “This kidney chain is really a continuing story of one sacrifice after another,” he says, “all in the name of love.”

Read donor and recipient stories, and follow the chain at uab.edu/kidneychain.

Take a closer look at the science behind UAB’s Incompatible Kidney Transplant Program at uab.edu/mix/stories/incompatible-kidney-transplants.

Learn more about kidney transplantation from UAB Medicine at uabmedicine.org/patient-care/treatments/kidney-transplant.

Visit uabmedicine.org/kidneytransplant to become a living-kidney donor, or sign up at organdonor.gov to indicate your interest in donating your organs after your death.