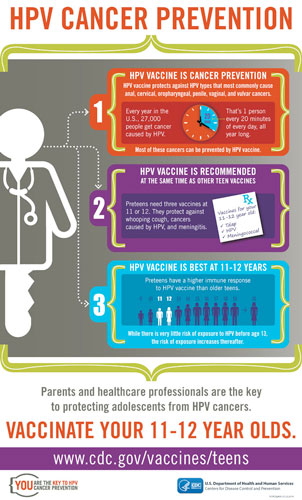 Click to enlargeIn response to low national vaccination rates against the human papillomavirus, the University of Alabama at Birmingham Comprehensive Cancer Center has joined all 69 of the nation’s top cancer centers in issuing a statement urging for increased HPV vaccination for the prevention of cancer.

These institutions collectively recognize insufficient vaccination as a public health threat and call on the nation’s physicians, parents and young adults to take advantage of this rare opportunity to prevent many types of cancer.

“The National Cancer Institute-designated cancer centers are at the cutting edge of cancer research, treatment and prevention, and we now have joined forces because of the compelling research that clearly shows the HPV vaccine is critical in saving lives by preventing HPV infection and its associated cancers,” said Edward Partridge, M.D., director of the UAB Comprehensive Cancer Center. “We hope our collective action will educate and motivate the public and highlight this tremendous opportunity we have to eliminate a preventable cancer.”

NCI-designated cancer centers joined in this effort in the spirit of President Barack Obama’s State of the Union call for a national “moonshot” to cure cancer, a collaborative effort led by Vice President Joe Biden.

UAB has been at the forefront of conducting groundbreaking cancer research, especially in developing the HPV vaccine. Warner Huh, M.D., director of the UAB Division of Gynecologic Oncology, has tested several HPV vaccines and was one of the first to test Gardasil, the first U.S. Food and Drug Administration-approved vaccine for the prevention of cervical cancer and genital warts. About a year ago, Huh was involved with a multinational study of a new nine-valent HPV vaccine that has even further potential to dramatically reduce rates of cervical cancer.

“There is no question that the vaccine works,” Huh said. “We now have a second-generation vaccine that protects against 90 percent of the HPV that are associated with cervical cancer. This vaccine can literally eradicate the majority of cervical cancer, if given widely and appropriately.”

However, vaccination rates remain low across the United States, with less than 40 percent of girls and slightly more than 21 percent of boys receiving the recommended three doses. Research shows there are a number of barriers to overcome to improve vaccination rates, including a lack of strong recommendations from physicians and parents’ not understanding that this vaccine protects against several types of cancer.

“We’re really on the verge of a dramatic change that will positively affect all individuals, particularly women, in the United States,” said Huh, who is also a senior scientist at the UAB Comprehensive Cancer Center. “The real remaining issue is we need to improve vaccination rates in this country.”

To discuss strategies for overcoming these barriers, experts from the NCI, CDC, American Cancer Society and more than half of the NCI-designated cancer centers met in a summit last November. During this summit, cancer centers shared findings from 18 NCI-funded environmental scans, or detailed regional assessments, which sought to identify barriers to increasing immunization rates in pediatric settings across the country.

The published call to action was a major recommendation resulting from discussions at that summit, with the goal of sending a powerful message to parents, adolescents and health care providers about the importance of HPV vaccination for cancer prevention.