UAB employees rally around one of their own fighting breast cancer

by Tyler Greer
Almost 100 people have signed up for the annual Komen Race for the Cure in honor of Physical Medicine and Rehabilitation’s Yvonne Akins, a mentor and friend to many at UAB for 42 years. 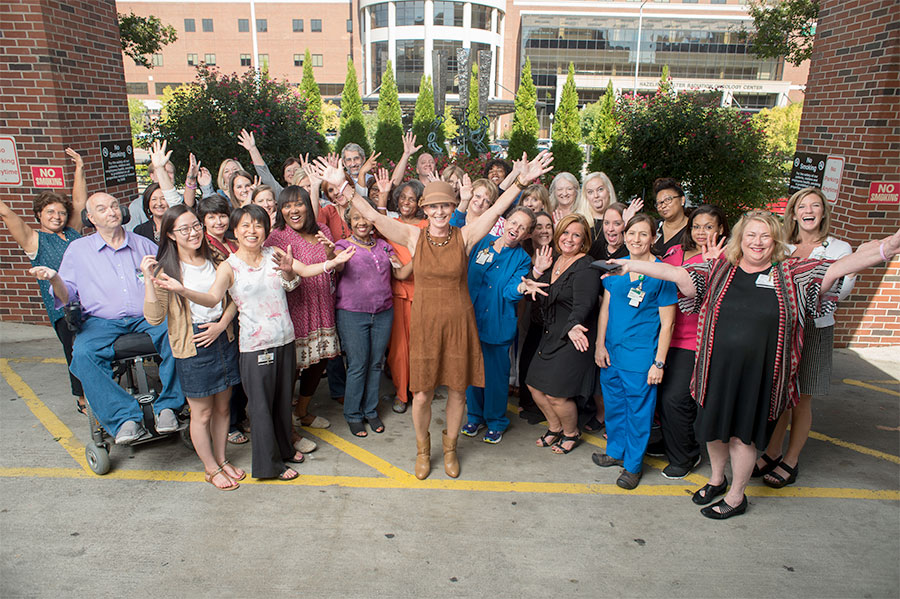 More than 95 people have signed up for the Oct. 15 Komen Race for the Cure in support of Yvonne Akins (center), a 42-year UAB employee in Physical Medicine and Rehabilitation.

Yvonne Akins came to the United States more than four decades ago after the Norway native met her husband, Bob, a U.S. Navy man working for NATO during the Vietnam War in Oslo. Despite arriving in the U.S. knowing very little English, Akins overcame the language barrier quickly, and found a job at the University of Alabama at Birmingham where she has endeared herself to co-workers and patient alike for 42 years in the Department of Physical Medicine and Rehabilitation.

She has been a mentor, a confidant and an encouragement to others and is a dear friend to many. Now, for all of the times she has helped others in their times of need, Akins is the one receiving support from a network of people she has impacted through four decades.

Akins, executive administrator of Physical Medicine and Rehabilitation, was diagnosed with breast cancer July 28. So far, 97 people have signed up to walk or run as a part of Yvonne’s “Akins Angels” team at the annual Race for the Cure event Oct. 15, an event held each year during Breast Cancer Awareness Month. “Akins Angels” have raised $3,640 for cancer research, which, along with 97 team members registered to participate in the run, is tops among all teams entered through today. Of those 97, more than 60 are UAB employees.

“Yvonne is the most influential person I have ever met or been around in my life,” said Tracy Brewer, administrative manager for Physical Medicine and Rehabilitation in UAB’s School of Medicine. “She affects people, and she doesn’t even realize it — just by how positive she is and how willing she is to help others. She makes herself available to teach and mentor and give people guidance. When someone needs something, they call her because they know they’re going to be put in the right hands. They know they are going to get help from her. Now, it’s her turn to get help from us.”

Akins’ primary care physician felt a place of concern on her breast during her annual checkup in June. An ultrasound showed there was a trouble spot in the breast along with enlarged lymph nodes, and the biopsy confirmed it — Akins had stage 2 lobular carcinoma, cancer that begins in the milk-carrying ducts and spreads beyond them.

The diagnosis was tough for Akins to accept at first for understandable reasons; she had already beaten cancer once before.

“My initial thought was ‘Well, I thought I’d already paid my dues,’” Akins said. “I was diagnosed with melanoma in 2005, and I had just been cleared of that a year ago.”

Fortunately, the lobular carcinoma was not related to the melanoma. However, unlike her first cancer battle, Akins learned that this fight was going to be even more extensive. 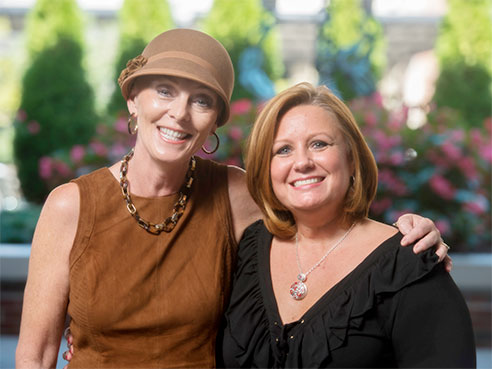 Yvonne Akins, left, and Tracy BrewerAkins’ melanoma never spread into her lymph nodes, and she never needed any chemotherapy treatments. But when she went to her first meeting with her UAB Medicine Breast Health Center physicians in the Comprehensive Cancer Center, a team of 10 people from oncology, radiation oncology, surgery and other areas explained to her in detail how invasive the breast cancer was and thoroughly explained all of her options for treatment.

Akins’ regimen includes weekly chemotherapy treatments for six months, after which she will have surgery. After surgery, Akins will begin radiation treatments.

“The interesting thing is, as consuming as that is and as it sounds, it doesn’t really feel daunting,” Akins said. “It’s just going to be a bump in the road. It’s an inconvenience. It’s an inconvenience with the hair loss and missing work. But, truly, I see every day as one day closer to the end of treatment. And being treated here at UAB, I know what kinds of doctors we have. I know the expertise we have. I’m in great hands.”

UAB’s Comprehensive Cancer Center is one of the nation’s leading cancer research and treatment centers and is the only National Cancer Institute-designated comprehensive cancer center located in a six-state area that includes Alabama, Mississippi, Louisiana, Arkansas, South Carolina and Georgia.

UAB Cancer Center physicians offer patients access to state-of-the-art treatments and clinical trials through a nurturing team approach, and their services are routinely recognized as being among the nation’s best. More than 330 physicians and researchers in the center treat an estimated 5,000 new patients each year.

“I am part of a clinical trial, and the way everything is so well-coordinated and put together — my entire health plan that they have laid out — is just amazing,” Akins said. “From the first visit, it’s like, ‘Man, how does anybody get that smart?’ You’re just so impressed. And it’s not just the physicians. The infusion therapy nurses are just wonderful. You don’t just feel like you are supported by everyone; you know it through their actions and interactions with you.”

A life of empowering others

Supporting others through their actions and interactions. Those who know Akins best say that is a statement that embodies how she lives her own life, too — always making sure everyone has the tools, knowledge and confidence they need to be successful people.

Amie McLain, M.D., chair and professor of the Department of Physical Medicine and Rehabilitation, was a translational research assistant at UAB when she first met Akins. It was right before McLain began medical school, and they became good friends.

McLain admired Akins, the journey she took to come to the United States and UAB, and the drive and passion she showed toward others, in her work and in her life.

“She’s so smart and educated, and she really gained a lot of responsibility because of who she is and the way she relates to people,” McLain said. “She is just a relentlessly positive person and supporter of people. She just has a way of giving people the confidence that something is attainable when you work for it and assuring them they had the capabilities of working to achieve their goals. She has always supported me and this department and is a significant reason for its success.”

Sometimes, that has included doses of tough love.

Tracy Brewer was drawn to Akins when she started working in Physical Medicine and Rehabilitation as a 19-year-old receptionist. Akins thought a lot of Brewer as a worker and admired the effort she put into her job.

But Akins also had concerns about her performance in some areas. Most notably, the way Brewer interacted with co-workers and the physicians.

Shortly after she began working at UAB, Brewer inherited the responsibility of running the office for several months when her immediate supervisor was out on maternity leave. Her supervisor ultimately made the decision to stay home with her newborn, vacating her position. Brewer went to Akins to lobby for the promotion and didn’t get the reception she expected. 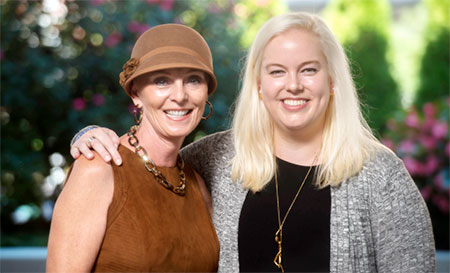 Yvonne Akins and daughter, Kristina, who works in the Department of Psychiatry.“Yvonne flat out told me no,” Brewer said. “I looked at her like she had lost her mind. Of course, I was 19, angry at the response so I got up and walked out. I didn’t give her a chance to explain. I came back in on Monday, and I asked to meet with her because I decided I wanted an explanation. I’ll never forget what she said. ‘I was going to explain what I meant but you walked out on me. Your mouth is going to get you in trouble. You do not control your tongue when talking to physicians or other staff, and you don’t show them respect.’ I sat there and listened to her, and I knew she was right. I was going to have to learn so much about how to be a professional at 19 if I wanted to move up within the company.”

That conversation took place 26 years ago. After their heart-to-heart discussion, Brewer asked to be given the opportunity of a six-month trial as the office manager, and Akins agreed. And if Brewer didn’t show maturity in her attitude and professional demeanor, Akins told her she would return to her previous duties.

Brewer accepted the challenge; but more than that, she began watching everything Akins did, and asked her how to handle situations when she felt she needed guidance. Akins quickly became her mentor and continues to be her rock unto this day in Physical Medicine and Rehabilitation, where Brewer is now the administrative manager.

“Yvonne took me under her wing and gave me guidance and confidence. She gave me an opportunity,” Brewer said. “She allowed me to sit in her office anytime I wanted and talk to her about anything. And the important thing about this story is that she hasn’t done that just for me. She does that for everyone all of the time. I’ve watched her do it for 26 years.”

More than a mentor

These are just a few of many stories people across Physical Medicine and Rehabilitation have about Akins, which makes it easy to see why so many have rallied around her in her time of greatest need.

They talk about her kindness, and how she always has a wrapped present in her office for someone — a co-worker whose child graduated from high school, or the janitor’s wife who just had a baby — whenever the occasion arises.

They talk about her attention to detail. When a new employee came to UAB with no institutional knowledge, Akins made sure there was a mentor in place to take her out for lunches and show her around campus over a period of several months so she would quickly adapt, learn more about her place of employment and enjoy where she worked.

And now, they talk about how she fights. How she attacks cancer through the eyes and expertise of the physicians, researchers and nurses in UAB’s Comprehensive Cancer Center and with the knowledge that she has the additional support of her Angels — all 97 of them and growing by the day.

“Yvonne is not boastful, and she does not seek attention because she’s always quietly helping others in some form or fashion,” McLain said. “She’s really just overwhelmed at how many people are rallying around her. It really is helping her and giving her strength that so many people care.”

“It does mean a lot, more than words can really express, that so many people care,” Akins said. “You’re kind of surprised, you know? I was sitting in the waiting room preparing for my treatment the other day and looking at all of the people in the room, and I was thinking, ‘I really hope everyone in here has the support I do,’ because it would be hard to go through this on your own. I’m really, truly, blessed.”