by Tyler Greer
A meeting for advice on a business matter turned into “a moment of divine intervention,” leading one Birmingham man to become a living donor. 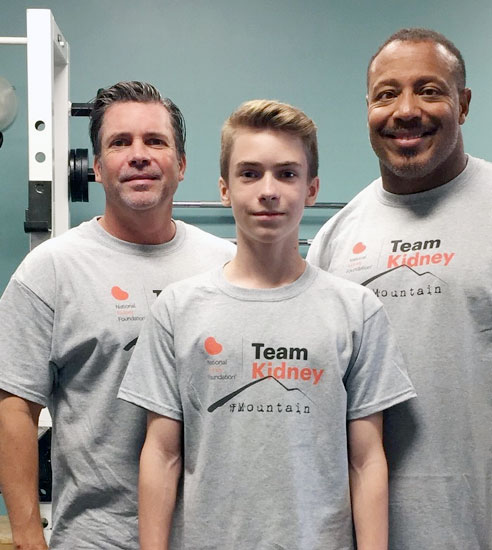 From left: Bob Kuykendall, his son Cade and Greg Hasberry.Eighteen months ago, Greg Hasberry and his friend Bob Kuykendall checked into UAB Hospital together. Hasberry was sick and needed a new kidney. Kuykendall had told him only a month earlier that he had gone through the testing, was found to be match and would be donating to him.

The pair had successful surgeries, restoring life to Hasberry, who had endured almost four years of dialysis.

“Life is good,” Hasberry said earlier this month. “I opened a fitness studio. I’m back active — as active as I can be and probably more than most. I’m really happy. I’m at one of the best places I’ve been in my life.”

And now, the next big challenge awaits Hasberry and Kuykendall, and it is one of the tallest physical, emotional and mentally taxing challenges the Earth has to offer.

In an effort to bring awareness to the power and benefits of living organ donation, Hasberry, Kuykendall and Kuykendall’s son, Cade, will attempt to climb Mount Kilimanjaro in Tanzania, East Africa, in June 2017. With an elevation of 19,340 feet, Mount Kilimanjaro is the tallest freestanding mountain in the world and the most recognizable mountain in Africa.

About 35,000 tourists attempt to climb the mountain each year, and about half of them make it to its peak.

“We want to use our experience to benefit others and bring awareness to donation,” Kuykendall said. “I’ve had so many people ask me questions — ‘How much does it hurt, do you have to take medication, do you have to eat differently?’ It’s like it never happened, like I never donated. The way I look at it is, when do you ever have a chance to impact someone’s life by doing nothing? It was almost a selfish thing for me. Like, look how good it made me feel because I got to do something for somebody.”

Hasberry and Kuykendall say they picked a mountain to climb for the imagery and, they hope, for inspiration of others who are facing obstacles in their own lives.

Michael Hanaway, M.D., surgical director of UAB’s Kidney Transplant Program, was Hasberry’s transplant surgeon. Hanaway says he has never had a transplant patient attempt to climb one of the tallest mountain peaks in the world. He says the great thing about the story from his perspective is that it involves both the donor’s and the recipient’s attempting the feat together.

“It really shows that, if you get a kidney and it works well, you can really get your life back, get yourself into great shape and take on one of life’s greatest challenges — which is the goal for all of our patients,” Hanaway said. “We want them to get them their lives back. And from Bob’s perspective, it points out that, after you donate a kidney, your life doesn’t change. If you’re healthy enough to donate, your life will go back to normal with no restrictions. You will have good health and can take on whatever challenges you want to pursue.”

Hasberry was diagnosed with kidney disease five years ago at the age of 41. He was admitted to a hospital on a Friday afternoon and says he didn’t really understand what was going on with his body. He was in intensive care for two weeks and in the hospital for five weeks total. That was when he learned he had kidney disease and complete kidney failure.

The diagnosis explained why he had felt so tired and wasn’t feeling like his normal self. It was a tough blow for the Birmingham native. As a personal trainer and bodybuilder, Hasberry took pride in keeping himself in peak physical condition.

Hasberry started dialysis almost immediately after his diagnosis, with treatments’ taking place three days a week for almost four and a half years. Even for someone in the physical condition of Hasberry, dialysis took its toll.

“Dialysis robs you of everything, every ounce of energy you have,” Hasberry said. “It’s probably the hardest physical fight I’ve ever been in. It’s also probably the most humbling experience I’ve ever had. It was life-changing. At the time, I didn’t really see it; but it was life-changing for the better. It increased my appreciation for life, for living.”

Hasberry did not know how long he would stay on dialysis. He just knew he would be waiting until he moved to the top of the deceased donor list or had a living donor come forward on his behalf. Even then, Hasberry and his donor would have to be a match or find another donor-recipient pair to potentially partake in a kidney swap.

Hasberry and Kuykendall had been friends for a little more than a decade, but did not see each other often or speak on a regular basis. In fact, Kuykendall was unaware of how sick Hasberry was when he took a phone call from his friend one day. Hasberry had reached out on a business-related issue and wanted to seek Kuykendall’s advice on how to handle it.

“In hindsight, it was divine intervention,” Kuykendall said. “I saw the dialysis scars and the ports, and I had known he had an illness; but I didn’t know what it was or how bad off he was, so I started asking him questions. I had no idea he had kidney disease. But, just sitting there with him, drinking a cup of coffee and listening to what was going on, I knew when I was sitting there that I was going to call UAB. I knew I was going to be the guy to give him a kidney.”

That feeling was further affirmed in Kuykendall’s mind two days later. He had spoken to his wife about being tested to be a donor immediately after seeing Hasberry, and the Kuykendalls met another man in Auburn who told them he was a living kidney donor. He was a restaurant owner who had donated to a student eight years earlier.

“We talked for about 45 minutes, and I was just sitting there thinking, ‘This is going to work. I’m going to be able to do this for Greg,’” Kuykendall said. “It wasn’t long after that that I got the call to do my lab work. The next thing I knew, we were in.”

But first, Kuykendall had to tell Hasberry, because he had gone through the entire donation process anonymously. Kuykendall did so in part because he didn’t want to get Hasberry’s hopes up in case he couldn’t donate for an unforeseen health reason. But not only could Kuykendall donate, he was a match. He could donate straight to his friend.

Kuykendall called Hasberry to ask for a meeting, which Hasberry presumed was related to the business situation he originally reached out about. Instead, Kuykendall’s wife came in with Bob, and they told Hasberry that Bob was donating a kidney to him.

“It was another humbling and life-changing moment,” Hasberry said. “To be completely honest, it renewed my faith in humanity. It brought me closer to God. It actually was a renewal of my personal faith. At a time in my life when I didn’t think I had anything left, and I was praying for every breath I got and had, it was a shot of energy I had not had in a long, long time.”

Knew he was in good hands

Hasberry says he felt fortunate UAB Hospital was in his backyard.

Hasberry says he felt an immediate connection with Hanaway and was instantly confident he had a chance to get his life back.

“I immediately clicked with Dr. Hanaway because he’s a no-nonsense kind of guy who tells it like it is,” Hasberry said. “He had a dry sense of humor, too, which I appreciated. I just had so much support from him and the nurses — Linda Sekel, Amy Williams, Rebecca Burns and others. I had several UAB employees I’ve known through my professional life come by and visit. The care at UAB was just amazing.”

Hanaway says Hasberry always amazed him as a patient. Hanaway marveled at how consistently Hasberry exercised even while enduring dialysis treatments.

“Almost four years on dialysis would be hard on anybody,” Hanaway said. “That’s a lot of years of dialysis. People at best can stay the same on dialysis, but they rarely get healthier over time. Greg was in good shape when he started on dialysis, and he really fought to keep himself in good shape, which is uncommon because of the toll dialysis can take. Now that he’s transplanted and recovered, he’s going to be in even better shape. He’s the type of guy who would want to do something like climb Mount Kilimanjaro, and he’s the type of guy who can do it.”

Hasberry and Kuykendall plan to attack this challenge with the same vigor and mindset they displayed leading up to, and since, May 20, 2015, when their respective surgeries took place.

“We’re excited,” Kuykendall said. “I’m pumped to be doing this with Greg and with my son. For me, this journey is about how Greg and I have interacted in a way we didn’t ever expect. It’s an honor to do this with him.”

“I have no fear,” Hasberry said. “After what I’ve been through, trying to climb Mount Kilimanjaro, this is nothing. I’ve thought about what it would be like to make it to the top, and it’s pretty intense, to say the least. I may break out in tears. I may jump up and down. It’s going to run the gamut of emotions. All in all, it’s a celebration of life on a whole lot of different levels. It’s a celebration of living, accomplishment, achievement and overcoming. Most of all, to me, it’s a celebration of what God has offered. You’ve got to trust in his promise and never quit, never give up. As hard as it can be, you can’t quit. You can’t quit.”

Hasberry and Kuykendall have been approached by local companies Alabama Outdoors and Planet Fitness to partially sponsor and support their journey. And the duo are inviting anyone interested to join them on their trip to climb Mount Kilimanjaro in June 2017. More information is available on the National Kidney Foundation website. To find out whether you can be a living donor for a family member, friend or stranger, fill out the UAB Living Kidney Donor Transplant Form.