by Jeff Hansen
The clinical lab in Spain Tower analyzes up to 5,000 tubes of blood each night, providing vital data for caregivers and patients in the nation’s third-largest public hospital.

Until now, a team of late-shift clinical technologists in the University of Alabama at Birmingham analyzed between 4,000 and 5,000 tubes of blood every night, providing information to help guide patient care, while keeping watch for abnormal test results that require immediate notification to clinicians.

Now a new $6.8 million, automated lab in the UAB Department of Hospital Labs, Division of Laboratory Medicine does the work. With clicks, whirrs and blinking lights, a moving track carries tubes to workstation machines that can centrifuge the tubes, remove caps, process samples to place in aliquoted tubes for chemistry and reference testing, count cells and create smears on microscope slides, replace caps, and place finished tubes in refrigerated or room-temperature storage towers. At each stop, the tubes are twirled in front of a laser light as a sensor reads their bar codes. The work goes on, untouched by human hands. 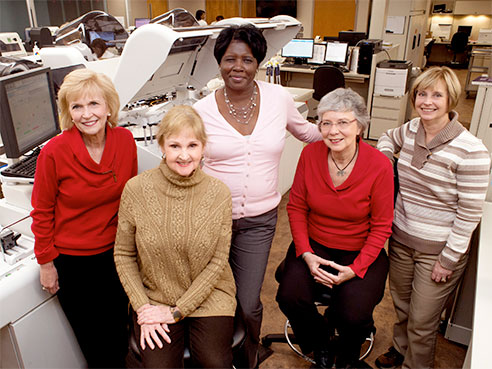 “Every tube represents a patient,” said Mary Alice “Mac” Crum, retired administrative manager for UAB Laboratory Medicine and consultant for the new lab during its installation and months of validation studies and fine-tuning.

While the automated line was being installed and calibrated, the hands-on analysis by laboratory technologists had to continue in other lab spaces. “It’s like redesigning a plane while you are flying it — the technologists and lab techs have been phenomenal employees working in such complex conditions during the renovation this past year,” said Sherry Polhill, MBA, the administrative director of UAB Hospital Labs and Respiratory Care. Polhill says the technologists and lab techs are able to make a move to newly established laboratory industry lines within Hospital Laboratories as the automated equipment is coming online. Donna Scott, the lab medicine administrative manager, monitored data on the effectiveness, efficiencies and productivity of the workload to advise the best timing to move personnel.

Each day brings a flood tide of work to the new lab in University Hospital’s Spain Tower.

One to 5 a.m. is the busiest time. Blood tubes arrive from the hospital floors in large pneumatic carriers like the ones used at drive-through banks. Lab techs load the tubes into racks, and place the racks at the start of the long, moving track that winds around three sides of the lab. Then the analyzers take over. 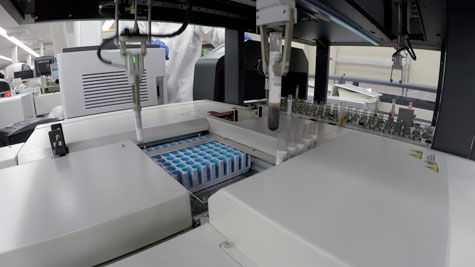 Staff watch for yellow warning lights on the top of each workstation that signal low levels of reagents or a problem reading a bar code. Medical technologists retrieve tubes that show abnormal test values and verify the information for immediate reporting, as necessary.

During the hospital lab renovation, the work area was sealed and kept under negative air pressure to prevent any dust from escaping. The project also required construction above and below the lab — an emergency power generator in the basement and new air-handling equipment on the third floor, to deal with heat produced by the line.

As is common in high-tech fields like genome sequencing or super computers, the laboratory workstations have been given names to make it easy for staff to talk about which station needs attention.

“The techs voted to pick names from the television show “The Big Bang Theory,”’ Crum said. “There are Sheldon, Leonard, Bernadette, Raj, Penny and Howard.”

The automated line was purchased from Beckman Coulter. After delivery of the equipment in two tractor-trailers in January, teams of Beckman installers, application personnel and service engineers worked for three months to get the first of the line going, as further installation and validation continued. Three UAB laboratory staff went to Beckman for training as key operators.

“This is an investment by the University Hospital that will shorten turnaround time and allow testing to become standardized for quality purposes,” Polhill said.

“This $6.8 million project will have significant impact in our patient care in Birmingham and the state of Alabama,” said X. Long Zheng, M.D., Ph.D., medical director of the Division of Laboratory Medicine. Zheng holds the Dr. Robert B. Adams Endowed Professorship in Pathology.