Birmingham among 13 U.S. cities committed to end the spread of AIDS by 2030

by Alicia Rohan
UAB partners with state agencies and organizations to aggressively decrease the spread of HIV/AIDS to the point of elimination of the spread of AIDS by 2030. 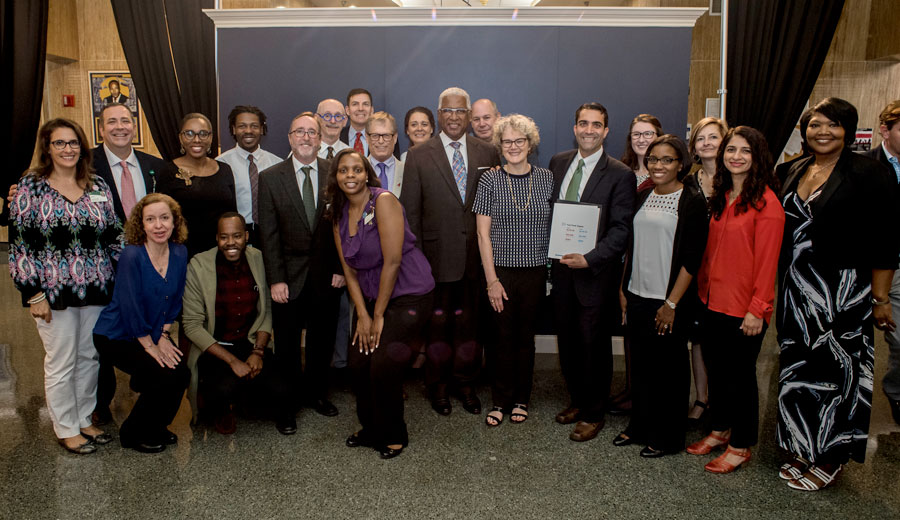 UAB Center for AIDS Research faculty, staff and volunteers join the city of Birmingham by signing the Paris Declaration to eliminate the spread of HIV/AIDS by 2030.

Birmingham has become one of 13 cities in the United States dedicated to committing local resources to achieve key Paris Declaration goals in the fight against AIDS by 2020 and ending the spread of AIDS by 2030.

State agencies, local organizations and the University of Alabama at Birmingham are partnering to achieve the following by 2020:

“If we can achieve the 90-90-90 plan by 2020, along with zero stigma and discrimination against those living with HIV/AIDS, we will be on our way to ending the spread of HIV/AIDS by 2030,” said Michael Mugavero, M.D., professor in the UAB Division of Infectious Diseases and co-director for the UAB Center for AIDS Research. “The only way to effectively do this is by coming together as a community to commit all of our resources to achieve this goal.”

“The research at UAB continues to advance within the HIV/AIDS field,” said Michael Saag, M.D., founder of the UAB 1917 Clinic and director of the UAB CFAR. “Without buy-in from our community, we can do only so much to educate, diagnose and treat those living with HIV/AIDS. This partnership will propel us to ‘bend the curve’ downward, leading to eliminating the spread of a disease that continues to take lives.”

The UAB CFAR is one of the seven inaugural Centers for AIDS Research established in 1988 by the National Institutes of Health. A world leader in HIV/AIDS research and patient care, the UAB CFAR has been among the first to make the newest, most effective treatments available to patients, including the combination therapy that today is the standard of care. Always on the cutting edge, the UAB CFAR recently launched a 90-90-90 scientific working group as a centerpiece of the center’s strategic plan. As a chartered universitywide research center, UAB CFAR stimulates interdisciplinary, translational AIDS research that bridges basic, clinical and behavioral sciences.

The Fast-Track Cities initiative was launched on World AIDS Day 2014 in Paris, France. More than 70 high-burden cities around the world have since signed the Paris Declaration on Fast-Track Cities Ending AIDS and engaged political leaders, affected communities, civil society, city health officials, clinical and service providers, and other stakeholders to accelerate their local AIDS responses.