Students make fitness fun for everyone

Bubbles, dancing, a ball that beeps: Each year, UAB health professions and education students design creative ways to exercise for Alabamians with disabilities. Discover how the student teams adapt each person’s passions into fun challenges that encourage physical activity and healthy lifestyles. 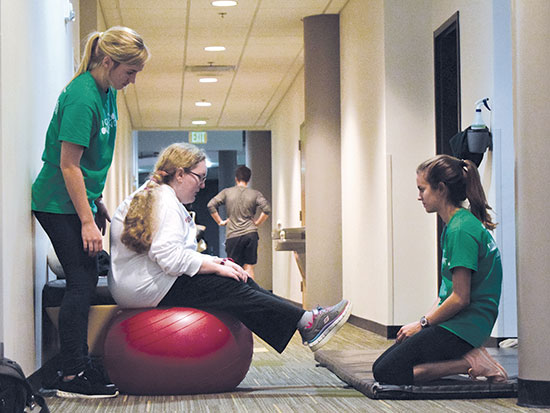 An ICDI team helps a student from Birmingham’s Horizons School learn to use an exercise ball.Last fall, Ethan Lake, a senior kinesiology student from Rainbow City, Alabama, met his mentee for the first time at the Alabama Institute for the Deaf and Blind (AIDB) in Talladega.

The shy, 3-year-old girl had complete hearing loss. She resisted playing with other children because she could not hear when someone approached her from behind, which made her nervous, he says. So she often sat alone, in silence,watching other children play. Moreover, well-intentioned grownups frequently carried her in their arms. Because she walked so little, she could hardly walk at all.

“She didn’t really play, and that was causing physical developmental delays,” says Lake. “She was just learning to walk. She didn’t know how to throw. Her motor skills weren’t developed the way they should have been.”

Lake came to AIDB through I Can Do It, You Can Do It (ICDI), a national program developed by the U.S. Department of Health and Human Services President’s Council on Fitness, Sports, and Nutrition. ICDI aims to help individuals with disabilities engage in regular physical activity and healthy eating. The UAB Department of Physical Therapy launched the program locally in 2014.

Through ICDI, physical therapy and occupational therapy students in the School of Health Professions and kinesiology students from the School of Education’s Department of Human Studies collaborate to mentor Alabamians with disabilities about healthy living. In 2016, more than 140 UAB students worked with nearly 100 clients at AIDB, The Horizons School, the Arc of Jefferson County and United Ability.

Tara Pearce, P.T., D.H.S., the Department of Physical Therapy’s associate director of clinical education, says cuts to gym classes and recess at many schools nationwide and rising obesity rates have prompted the President’s Council to call for a reintroduction of physical education and a focus on healthy eating. But that “can be a bigger challenge with students with disabilities because they sometimes need one-on-one support or assistance to participate,” she explains. “One benefit of ICDI is that we engage in activities that already exist in these locations, but we also bring resources and work with people in small groups so they get individualized attention to participate at a greater level.” 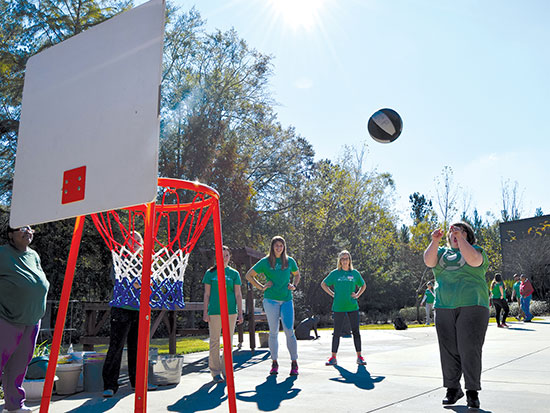 “She absolutely loved the bubbles,” says Lake. “She watched me chasing the bubbles, and she learned to chase them herself.”

Over time, Lake says, the team began taking her to the playground and incorporating other activities. By the end of the semester, the girl who once tired after walking just 10 minutes could join other children on the playground and maintain a brisk walk for up to 45 minutes. “It was a huge improvement,” he says.

Meanwhile, Sarah Beth Brooke, an Atlanta native pursuing a master’s degree in occupational therapy, partnered with a physical therapy student to mentor two AIDB students, ages 17 and 20, with visual impairment. The young men already played on the school’s basketball team, but teachers reported difficulties in keeping them physically active after the season ended.

So Brooke and her partner introduced the pair to beep ball, a game similar to baseball, except the ball is embedded with a beeping module that lets players listen and determine the ball’s location. “It was fun to teach them something new,” says Brooke. “One enjoyed running the bases, and the other liked hitting the ball.” 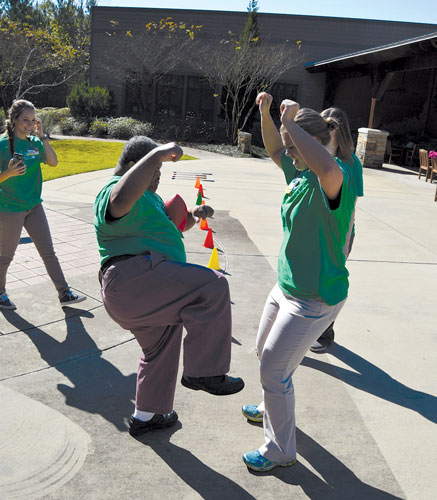 Brooke says ICDI taught her how to manage the unique problems of every client she will encounter in her career. “I learned a lot about addressing the client’s goals,” she explains. “You can read cases in books, but it’s different when the person is there in front of you.”

Another student, Cordova, Alabama, native Danielle Dawkins, teamed up with an occupational therapy major at the Arc of Jefferson County, which serves individuals with intellectual disabilities.

“In the first week, our team assessed our clients’ fitness levels and eating habits and then found ways to make exercise fun, interesting, and easy,” says Dawkins, a third-year physical therapy doctoral student.

One of her mentees was a 56-year-old woman who used a walker and had vision and hearing impairments. But “we found out that she loves to dance, so we incorporated that” into a plan to increase her endurance and dexterity, Dawkins says. “She also likes to play catch and was willing to do that, too.”

“The program is a good way to get exposure to the team approach of working with other disciplines for patient care,” says Dawkins. “It helps to bounce ideas off each other.”

Dawkins says she wants to work at an acute care facility someday, and Brooke plans to assist adults with low vision. Lake, who will graduate in December, plans to apply to UAB’s physical therapy program and eventually work with wounded veterans who are amputees. He says ICDI has been life changing.

“The most rewarding thing was watching the [mentees] come from point A to point B,” says Lake, “and how much better they were doing both socially and physically.”