by Adam Pope
Many cancers are curable if they are detected early, and UAB researchers are exploring ways to use cancer gene discoveries to develop screening tests to improve cancer survival. 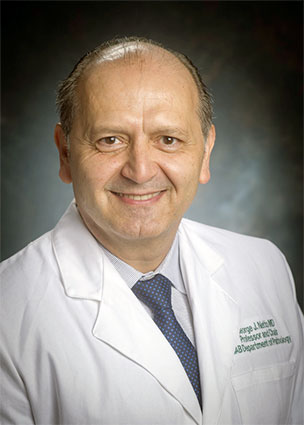 A new test for urothelial cancers could detect mutations in DNA that have been identified for those cancers earlier than traditional tests. The earlier detection of urothelial cancer could lead to earlier treatment, and potentially better outcomes for patients.

The test, called UroSEEK, uses urine samples to seek out mutations in 11 genes that indicate the presence of DNA associated with bladder cancer or upper tract urothelial cancer (UTUC). The researchers say the test, when combined with cytology — the gold standard noninvasive test currently used for detection — significantly enhanced early detection for patients who are considered at risk for bladder cancer, and surveillance of patients who have already been treated for bladder cancer.

These findings were published online on March 20 in eLife.

“There were nearly 80,000 new cases of bladder cancer and more than 18,000 deaths in 2017,” said George Netto, M.D., one of the study leaders for UroSEEK and chair of the Department of Pathology at the University of Alabama at Birmingham. “This is about using the urine to detect the cancer. UroSEEK is a molecular, noninvasive method of detection.”

Netto helped lead the development of the new test in collaboration with his colleagues at Johns Hopkins Kimmel Cancer Center before joining UAB.

UroSEEK is aimed toward early detection of bladder cancer in at-risk patients — those who may have blood in their urine or people who smoke — and patients who have already gone through a procedure to treat bladder cancer and need to be monitored for any recurrence of the disease.

“In almost one-third of patients, bladder cancer detection is late,” said Netto, who joined UAB as chair of the Department of Pathology in 2016. “The cancer has already gotten into the surrounding muscle. Even in those detected at an earlier stage, the tumors frequently recur, thus, patients are committed to a lifelong surveillance that requires invasive cystoscopy procedure and biopsies and is costly.”

Bladder cancer is the fourth most common cancer in men, according to the American Cancer Society. Netto is a senior scientist in the Experimental Therapeutics program at the UAB Comprehensive Cancer Center.