by Adam Pope
After living with pulmonary fibrosis for 15 years, Quintarius Daniels received a life-changing lung transplant that has helped him live the life he has always wanted. 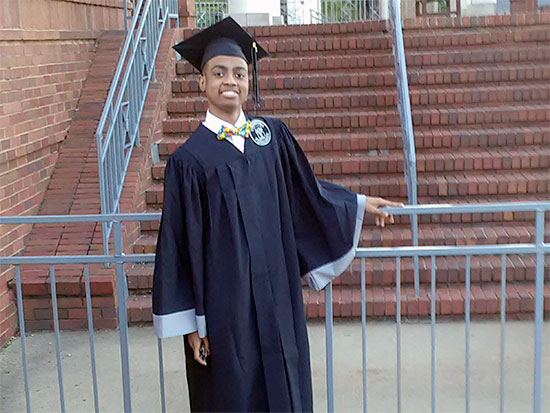 Thanks to his UAB surgeons, Quintarius Daniels will graduate high school tonight, May 18.Quintarius Daniels has had a hard road to travel in his 17 years of life, but thanks to University of Alabama at Birmingham School of Medicine surgeons, he now has a bright and less complicated future ahead.

On Oct. 17, 2017, Daniels, a Montgomery, Alabama, native, had a bilateral lung transplant at UAB Hospital after years of battling pulmonary fibrosis, a disease that had ravaged his lungs and compromised their function. Today, May 18, Daniels will walk across the stage at Brewbaker Technology Magnet High School, having earned his high school diploma — not to mention ditching his oxygen tank and being crowned prom king in the past seven months.

“I’m so excited to be where I am today,” Daniels said. “Before I had my transplant, things were hard, because I couldn’t do things other kids could do.”

Daniels was diagnosed with pulmonary fibrosis as a child. Pulmonary fibrosis is a scarring of the lung tissue that causes permanent damage to the lungs. As the scar tissue builds up and thickens, it prevents the lungs from transferring oxygen to the blood supply and diminishes the supply of healthy, oxygen-infused blood to the heart, brain and other organs. 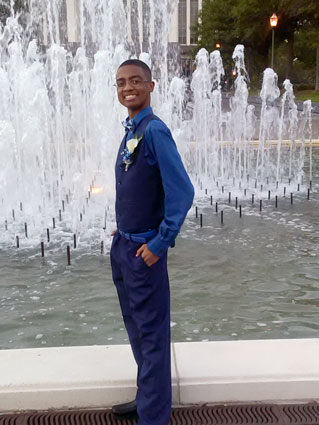 This sharply dressed young man was named Prom King this year.The reduced lung function makes it increasingly hard to breathe. While the condition may develop slowly over time, many patients diagnosed die within the first three to four years following diagnosis. There is no cure for pulmonary fibrosis, but certain medicines and therapies can help manage the disease.

Lashunda Harris, Daniels’ mom, noticed he was very sick one morning when he was around the age of 2. She quickly rushed him to the hospital, and he was later transferred to Children’s of Alabama, where he was diagnosed. For the past 15 years, Daniels has lived with an oxygen tank, which can put a hindrance on a child looking for a normal life.

“He was very limited as a child,” Harris said. “It was hard for him during P.E. at school to be able to do things every other kid could.”

In October 2017, Harris arrived at Brewbaker Tech to pick up Daniels from school. When she arrived, the school nurse brought him to the car in a wheelchair, which was unusual.

“The nurse said he wasn’t feeling good and his chest was hurting,” she said. “We went straight to Children’s.” 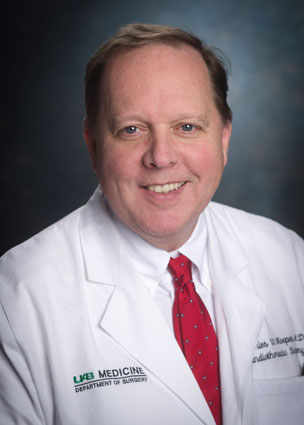 After more than a week on ECMO to help his other organs rest and recover, and five days of being on the list, Daniels received a double lung, or bilateral, transplant.

“Dr. Hoopes is a wonderful person,” Harris said. “He’s like another parent.”

Daniels says he was excited — and maybe a little scared — for the transplant, but he knew that it would mean things might start to be a little easier for him.

“I was excited and scared because I didn’t know how it would feel to have a new set of lungs,” Daniels said.

After the transplant, Harris says, Daniels is much more of a free spirit. This spring, he was able to run for the first time and often races with his sister. Daniels was also crowned his high school’s prom king, and he’s been able to enjoy time with his friends without having to worry about an oxygen tank.

“I’m very happy that I can live a more normal life as a teenager,” he said. “After the transplant, I’m now able to do more.”

Today, Daniels will walk across the stage and receive his high school diploma. He plans to enroll with the University of Phoenix and later become a video game designer.

“I’ve cried a lot since this transplant,” Harris said. “They’ve been happy tears. We still have a long way to go, but I am so happy he made it through.”