“This career move saved my life”

by Adam Pope
Valerie Powell credits her career shift from marketing to medicine as the turning point that saved her life. 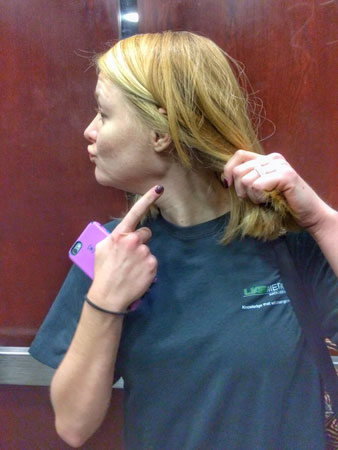 Powell noticed a tiny nodule near the hook of her jaw that had not been there before.After an eight-year struggle to figure out why a lump formed under her jaw, to say Valerie Powell believes all things work together for good is an understatement.

In 2009, Powell, program coordinator in the University of Alabama at Birmingham’s Department of Radiation Oncology, noticed a tiny nodule near the hook of her jaw that had not been there before. She assumed it must be a side effect of the several Novocain shots she received at the dentist for a cavity filling. After calling her doctor, Powell received regular CT scans, which provided no further insight.

After six years, Powell’s mother was diagnosed with breast cancer, which led to Powell’s wanting another CT scan for her nodule.

“I figured after Mom’s diagnosis and the fact this little nodule had obviously gotten angrier in size and tenderness that I should check on things again,” she said.

Her doctors determined that she had an extra piece in her parotid gland and advised her not to worry.

Things began to change for Powell after she landed her program coordinator job in UAB Radiation Oncology in March 2017. She started researching oncology protocols as part of her duties, and the first protocol she reviewed was a salivary gland tumor study, which persuaded her to try another CT scan from a different clinic, which also proved to be inconclusive. She also received an MRI, which showed the same results.

Powell knew something was wrong and demanded answers.

“I was pretty frustrated, so I emailed one of our radiation oncologists at UAB and explained that two doctors at a different local hospital were unable to figure out what it was,” she said. “I asked if he could take a look at my scans.” 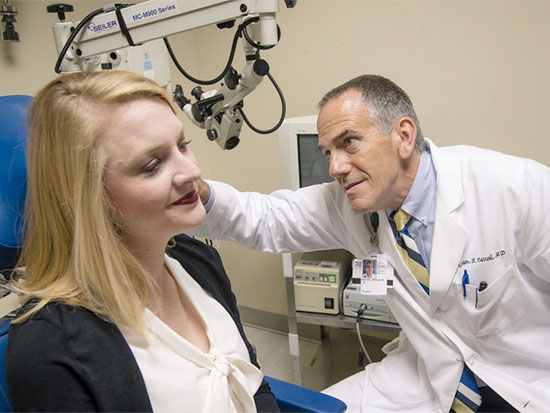 “We scheduled surgery to remove the tumor because Dr. Carroll said he would remove it no matter what if I were his family member,” she said. “From the moment I met Dr. Carroll, he did feel like family. He’s always been patient and understanding, and he’s always done his absolute best to make sure I left his office confident and comfortable with the care I was receiving, and I would say that that’s hard to find.”

After the tumor was removed and pathology tests returned, it was determined that the tumor wasn’t actually benign; it was malignant.

“I was flooded with questions in my head like ‘Why did a CT, an MRI and a needle biopsy all confirm that my tumor was benign when it was in fact cancerous,’” Powell said. “Why was this happening to me at 28 when I’ve barely been married two and a half years, and why had no one paid more attention to this knot in my neck for the last seven years since it had shown up?” 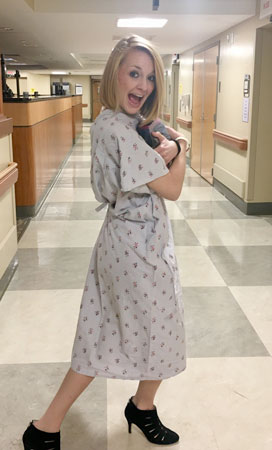 Powell only had to take a few steps from her office to her radiation treatment.The more she thought about it, Powell says, her faith reassured her that things worked out the way they were supposed to.

“I was supposed to go into surgery knowing it was benign because my little heart couldn’t have handled going into surgery knowing that I had let something dangerous live inside of me for that long,” she said. “God knew I needed the excitement of getting it out to carry me into that operating room with peace and a feeling of security.”

In September of 2017, Powell began seeing Sharon Spencer, M.D., professor in the Department of Radiation Oncology and senior scientist with the Comprehensive Cancer Center, for her radiation treatments. It was a familiar setting for Powell since she walked the path every day to her office, which resides just a few steps from patient care areas. She worked closely with Spencer in the months leading up to her diagnosis and treatment.

“This was kind of a neat plot twist in the workplace because I showed up to see Dr. Spencer as a patient instead of needing her signature,” Powell said.

After six weeks of daily radiation, Powell’s co-workers threw her a party to celebrate her final day of treatment.

“When I saw 50-plus people crammed in our break room yelling congrats at me, I lost it,” Powell said. “People from every single department — physicians, residents, billing, check-in, dosimetry, therapy, social work, administration and physics. They had all come for me, and right in the middle was my precious husband, K.T., my parents and my brother.”

Powell credits many people — at work and at home — who helped dry her tears, listened to her worries, and saw how the effects of radiation affected her physically and mentally. She says it was a hard road, but it was exactly where she was supposed to be.

“This was the road that led me to the career I never knew I needed,” she said, “and the career move that saved my life.”

Powell hopes to empower cancer patients and survivors through her blog where she documented her treatment and recovery. Click here to follow her journey.