by Savannah Koplon
Recovery from an eating disorder has helped one former Blazer athlete solidify her career path and has her determined to help others. 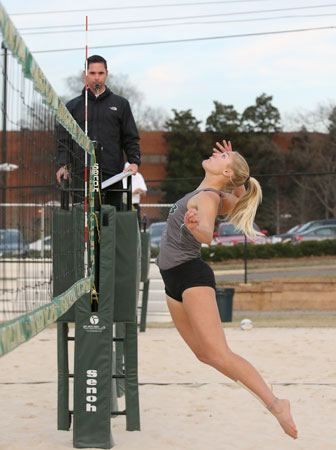 While a UAB athlete, Hoven's eating disorder was intensifying all while she was actively playing for the Blazers. When University of Alabama at Birmingham beach volleyball student-athlete Avery Hoven took the court in 2016, her teammates, coaches, family and UAB fans were in awe of her athletic abilities. What they were unaware of was the personal battle she was tackling off the field.

A Division I athlete of three years, Hoven was struggling with an unspecified eating disorder.

“I was channeling different issues into food management and using that control as a means of avoiding other things in my life,” said Hoven, a Hoover, Alabama, native. “It became apparent that my existing eating disorder was being fueled by the competitive culture of collegiate athletics, the constant emphasis on adequate food consumption and maintaining a specific type of physique to maximize performance.”

According to the National Eating Disorder Association, Hoven is not alone in her experience. It is estimated that disordered eating affects 62 percent of female athletes, with 58 percent at risk for developing bulimia nervosa and 35 percent at risk of anorexia nervosa.

As part of a school-supported team, Hoven says, ample nutritional resources and access to food were always at her disposal. In fact, that is the case for almost all highly competitive college athletes, and how, when, where and how often athletes consume food always has to be top-of-mind. For Hoven, managing her relationship with food was a constant struggle she could never bring herself to discuss openly with those close to her, be they her teammates, teachers, coaches or family.

Hoven recalls stressing about eating before practice to give her body the fuel it needed. She would consume snacks before and after matches, eat again after a workout for extra energy, and eat meals before bed to allow her body to recuperate.

Adding to the stressors of keeping her body fueled, Hoven struggled with perceived stress of maintaining a particular body appearance, specifically in a sport where a form-fitting uniform was key to performance and success.

“Many athletes experience a comparison complex from a physical and athletic standpoint, as our bodies are assets — our tool for success,” Hoven said. “However, for female athletes, be it in beach volleyball, gymnastics or softball, we have unique added pressures of being judged for our appearance — often above our performance. And that judgment comes from our size to how our uniforms fit.”

During her junior year, Hoven recognized the severity of her eating disorder and the control it had over her life. She voluntarily entered a rehabilitation program to seek treatment and support.

Now one year out of treatment, Hoven says experience has helped shift the trajectory of her career.

She is currently pursuing her master’s degree in communication management at UAB and has begun the process of researching her thesis.

“After my experience with an eating disorder, I’m passionate about understanding the prevalence of eating disorders in the collegiate athletic community, the environmental influences for these behaviors, and how athletic departments can help recognize habits and assist these students during really challenging times,” Hoven said. “I want to research the importance of interpersonal communication in terms of how it shapes the relationships between teammates and between a coach and an individual athlete, and how it influences perceptions of body image.”

She credits her ongoing growth and recovery to supportive family, friends and her UAB community, including teammates, coaches and teachers. Now that she has completed her competitive career, Hoven says, she has better recognized the scope of this issue and how it affects other student athletes.

Kelly Morrison, Ph.D., professor in UAB’s Department of Communication Studies and a mentor of Hoven’s, hopes that Hoven’s research will help inform theory and practice. Morrison also hopes it will have useful communication-related applications, including potentially forming new guidelines or programming for how athletes communicate about this issue.

“The growth that Avery has had in this last year has been so inspirational to me,” Morrison said. “I have watched her expand her knowledge and dissect theories on a subject that she clearly has a personal connection to, but that perhaps she had not thought about how it related to communication. More broadly, I think Avery is an excellent example for other UAB students who may not have considered graduate education — look what can happen from one conversation with a professor who asks a student ‘why don’t you study this?’”

Hoven’s long-term sights are set on obtaining her Ph.D. in communication studies, with a goal of teaching younger generations of student-athletes ways to communicate their struggles and seek help if they find themselves in a similar situation.

“I think it’s key that people understand that the warning signs for eating disorders aren’t always what they appear to be,” Hoven said. “I want to learn more about how these habits are communicated across campuses to ensure that athletes and coaches alike are supported in helping those in need seek recovery. Collegiate athletics provides such an invaluable and once-in-a-lifetime experience for so many, and I want to be a part of ensuring that all experiences are fulfilled to their maximum potential and not derailed by other issues that athletes can manage with help from a supportive community.”