UAB has a proven HeRO to reduce mortality in preterm babies

by Jim Bakken
UAB Hospital’s NICU uses a new, non-invasive system that can identify preterm babies who are at-risk for deadly infection.

A new tool more quickly identifies premature infants at risk for life-threatening illness and reduces mortality by 20 percent, according to research from the University of Alabama at Birmingham published in the Aug. 25, 2011, online edition of the Journal of Pediatrics. 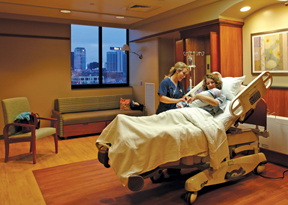 Premature babies are at greater risk for myriad health complications than babies delivered at full-term, and one of the most common causes of death is infection, says Wally Carlo, M.D., director of the UAB Division of Neonatology. Carlo is co-author of the report on the Heart Rate Observation System (HeRO), a technology used to assess high-risk infants.

“Using the Heart Rate Observation System, we were able to analyze multiple variables of the heart rate and calculate an index that estimates the risk of developing infection — before the infants show clinical manifestations,” Carlo says.

“HeRO is the first non-invasive technique for early detection of infection in such a high-risk population. It is a novel technology that gives real-time results instead of waiting on blood tests at a critical time,” Carlo says.

UAB Hospital was one of eight hospitals in the United States in which the system was studied in a randomized, controlled trial that included more than 3,000 patients treated from April 2004 to September 2010.

Today UAB’s neonatal intensive care unit is one of 16 hospitals worldwide using the HeRO system at a cost of about $8 to $10 per infant per day.

This study was co-sponsored by the National Institutes of Health and the Medical Predictive Science Corporation, which licenses the technology.