Dean G. Assimos, M.D., has been named the inaugural chair of the Department of Urology in the University of Alabama at Birmingham School of Medicine. 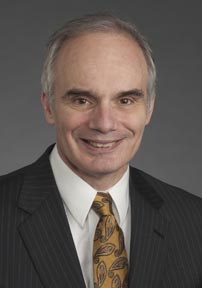 Assimos is an internationally known researcher and clinician, who comes to UAB from Wake Forest University where he was vice chair of urology. He received his undergraduate degree from Purdue and, in 1977, his medical degree from the Loyola Stritch School of Medicine in Chicago.

Assimos completed a six-year residency in urology at Northwestern University in 1983. He was a fellow in renal reconstructive surgery and stone disease at Wake Forest University the following year and then an American Urological Association research scholar from 1984 to 1986.

“I am excited about Dr. Assimos’ vision for the department and his plans to enhance the current clinical, educational and research programs of urology during this transition from division to department,” said Ray Watts, M.D., senior vice president and dean of the UAB School of Medicine. “This is a significant milestone for Urology, the School of Medicine, the Health System and UAB.”

“My goals and vision for the Department of Urology at UAB include developing a program that is regionally, nationally and internationally recognized for providing excellent patient care in all domains of urology,” Assimos said. “We will cultivate a stimulating educational environment for medical students, graduate students, residents, fellows and post-docs, as well as practicing urologists and the public. On the research front, we will establish clinical, translational and basic research programs that include studies of both benign urologic conditions as well as genitourinary malignancies with a goal of being in the upper tier of federal funding.”

Assimos has been actively involved in the establishment of practice guidelines in urology.  He is on the editorial board of the Journal of Endourology, and he contributes to the urologic survey section of the Journal of Urology. He is an NIH-funded physician scientist whose research has focused on endogenous oxalate synthesis of and the role of dietary oxalate in kidney-stone formation.

His clinical practice is concentrated on the surgical management of patients with complex calculous disease, ureteral reconstruction and metabolic stone evaluation and treatment.