In the wake of one of the largest mass shootings in the history of the United States, new research from the University of Alabama at Birmingham reveals that in general, states that require more comprehensive background checks before gun purchases also have fewer homicide and suicide deaths by firearm. 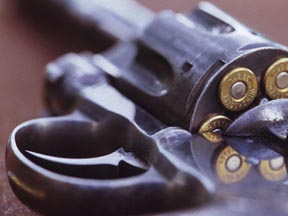 On July 19, 2012, a gunman entered a crowded Aurora, Colo., movie theatre during a midnight showing of “The Dark Knight Rises,” tossed gas canisters into the crowd and started shooting, killing 12 people and injuring dozens of others. The assailant legally stockpiled the four guns and ammunition used in the shooting from unregulated Internet sites and Colorado stores, according to the Associated Press. Suicide and homicide by firearm rank No. 4 and No. 5, respectively, in the top 10 violence-related deaths in the United States, according to the Centers for Disease Control and Prevention. The debate about gun control has again heated up across the country.

“After the theater shooting, emotions are running high, but it’s important to take a step back and focus on the science and the objective data,” says lead author Bisakha Sen, Ph.D., an associate professor in the School of Public Health.

Since 1998, the firearms dealers have used the Federal Bureau of Investigation’s National Instant Criminal Background Check System to instantly determine if a prospective buyer is eligible to buy firearms or explosives. Prior to the sale, cashiers must check to see if the buyer has a criminal record or other reason to be denied a sale. More than 100 million checks have been made in the past decade, and 700,000 have been denied purchases, according to the FBI.

For her study, which has been accepted by the journal Preventive Medicine and is expected to publish online by July 27, 2012, Sen and her co-author analyzed state-level data for homicides and suicides in the United States from 1996 to 2005 plus data on the background information required for gun purchases.

The results show that states with specific checks for restraining orders, fugitive status, mental illness and misdemeanors, which are considered more comprehensive checks, are associated with a 7 percent reduction in homicides and a 2 percent reduction in suicide deaths. Also, firearm homicide deaths are 13 percent lower when states have checks for restraining orders and 21 percent lower when fugitive status is checked.

The study controlled for circumstances such as whether or not the state had a policy of doing background checks for gun purchases before the 1993 Brady Act required them. It also controlled for many socio-economic indicators at the state level. But Sen says it is virtually impossible to control for everything that could affect results — such as gun shows purchases that occur with no background checks, guns exchanging hands illegally and varying political attitudes of voters.

“We think our findings indicate comprehensive background checks may help, but it would be a mistake to think of them as a panacea,” Sen explains.

“The results are correlational and not causal. These results are not a guarantee that if every state adopted these laws, they would see drops in gun violence,” Sen says. “Also, the reductions associated with the background checks are statistically significant, but they are not enormous in magnitude.”

Sen says the study also found that states that had been doing background checks for longer periods before the Brady Act had fewer firearm deaths. Also, there seemed to be a link between some state-level social indicators of unhappiness — such as higher unemployment and rates of marital instability — with more firearm deaths.

Sen believes that in light of the Colorado shootings, the next wave of research interest will be online purchases of weapons and ammunition.

“There is nothing in our set of gun control laws that would have flagged the suspect in the Colorado massacre because he had no kind of criminal record or history of mental illness,” Sen says. “But because he stockpiled his weapons with the help of the Internet, I think there will be a newfound focus on the implications of being able to purchase unlimited amounts of ammunition online.”