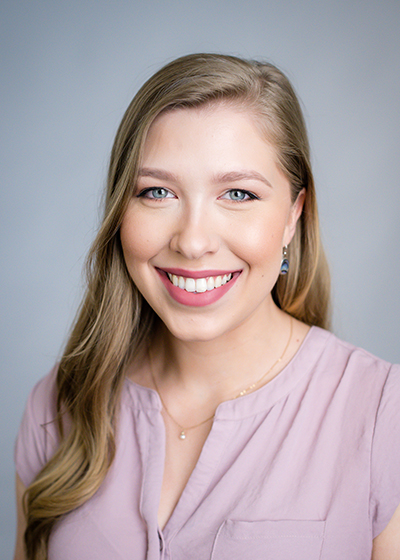 Kendall CurtisLast month, Kendall Curtis, a University of Alabama at Birmingham neuroscience junior from Enterprise, Alabama, traveled to Washington, D.C., with undergraduates from across the United States. There, she had the opportunity to tell senators and representatives why undergraduate research is important, especially at UAB.

Here, she shares her experiences at the undergraduate research event, Posters on the Hill. Curtis, the only student from Alabama at the event, has spent 20 to 25 hours a week during her UAB school years doing Alzheimer’s disease research in the lab of Jeremy Herskowitz, Ph.D.

“My first meeting of the day was scheduled with U.S. Rep. Terri Sewell. I met with a member of her staff, Senior Policy Adviser Hillary Beard, and briefly discussed the sheer amount of research conducted at UAB. We then discussed how UAB has rapidly become a major undergraduate research institution.

“With my goal of becoming a physician, I also spoke about research as a path to medicine. In my opinion, research experience nowadays is all but an unofficial requirement for medical school. In addition, due to the distinct disparity in the number of African American women doctors, I stressed the importance of supporting undergraduate research experiences that particularly focus on minority students.

“Ms. Beard agreed on that importance, and said that Rep. Sewell has spent a lot of her time and resources on furthering the well-being and education of minority women.

“I then met Rep. Sewell — she was incredibly engaging and excited about the research I was doing. We also spoke about my experience at the Alabama School of Math and Science, as she employs several graduates from the school.

“On the other side of Capitol Hill, I met with Andrew Burnett, legislative assistant for U.S. Sen. Richard Shelby. I asked Mr. Burnett to express my gratitude to the senator because his support of UAB, and of research as a whole, has had a direct, positive impact on me. Without such support, I would not have had as many opportunities — including attending Posters on the Hill.

“We discussed my research, and he seemed genuinely excited that the support of the senator’s office has produced such tangible results. We chatted about the Shelby Biomedical Research Building on the UAB campus; Burnett had just been there the week before, and he assured me that he was working to continue increasing federal research funds for UAB.

“The Posters on the Hill conference, where all the undergraduate researchers presented their research posters, was the last official event of the trip. I was able to speak not only with members of Congress and their staffs, but also with leaders in the scientific community. Many attendees were higher-ups in the American Chemical Society and the National Institutes of Health.

“I received uniformly positive feedback about my research. In fact, most people I presented to seemed just as excited as I was about the potential of this research into cognitive resilience in Alzheimer’s disease — nearly everyone knows someone who has suffered from Alzheimer’s. I also met many fellow undergraduate researchers who have done interesting work on a range of topics, including nanoparticles, STEM education and stress. It was nice to engage with undergrads from different backgrounds who all share a passion for research.

“The next day, I explored the D.C. National Mall with Emily Churchman, a fellow undergraduate researcher from Texas. We rode electric scooters the entire day, visiting every museum and gallery we could fit in — the National Gallery of Art, the Air and Space Museum, the National Portrait Gallery, the Lincoln Memorial and Washington Monument, the U.S. Botanic Garden, and the Einstein Memorial at the National Academy of Sciences. It was a lot; but we were able visit them all, thanks to the scooters.

“Overall, I had an amazing time. Posters on the Hill was an incredible experience, and I got to see undergraduate research from a different viewpoint. 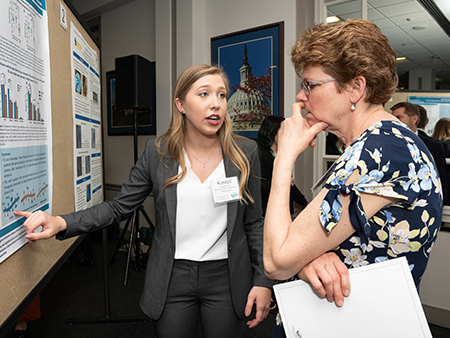 At UAB, Curtis is a member of the Science and Technology Honors Program in the UAB Honors College. Curtis is already a co-author on two papers with her Herskowitz lab colleagues and has a third in publication. She said she was eager to attend Posters on the Hill because “it’s important to show our congressional leaders that undergraduates can do actual research that’s important to science.”

Curtis does basic research in Alzheimer’s disease in the lab of Jeremy Herskowitz, Ph.D., an assistant professor in the UAB Department of Neurology and the Patsy W. and Charles A. Collat Scholar in Neuroscience. Her work was part of a study funded by the National Institute on Aging of why some older people — whose postmortem brains show the pathology of Alzheimer’s disease — never developed clinical dementia during their lifetimes and remained cognitively normal. This trait is known as cognitive resilience.

Curtis was the first UAB presenter at Posters on the Hill in at least five years, says Gareth Jones, assistant director of the UAB Office of Service Learning and Undergraduate Research. “This national gathering of undergraduate researchers is one of the biggest honors for an undergraduate,” he said. “They select only a few out of hundreds and hundreds of applications.”