Archaeology from Space launches in Birmingham

by Alicia Rohan
A UAB professor and author will host a local literary event and fundraiser for GlobalXplorer. 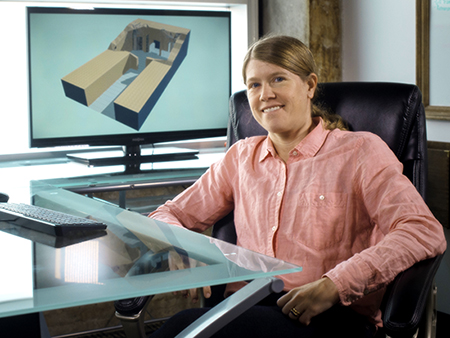 Sarah Parcak, Ph.D., Department of AnthropologyIn her newly released book “Archaeology from Space: How the Future Shapes Our Past,” Sarah Parcak, Ph.D., a professor of anthropology at the University of Alabama at Birmingham, demystifies the extraordinary new world of space archaeology — a field that has transformed our ability to rediscover and understand ancient civilizations.

It is a science that combines aerial photography with high-tech infrared satellite imagery to reveal ancient cities, pyramids and temples that have otherwise become completely invisible with the passage of time.

Kirkus Reviews describes the book as, “Indiana Jones meets cutting-edge satellite technology. It’s every bit as exciting as it sounds … [a] fascinating adventure memoir … this book elicits that anything-is-possible feeling — a must-read.”

The “Archaeology from Space” book launch and author event will take place at the Birmingham Museum of Art on Thursday, July 18, at 7 p.m. A VIP ticket meet and greet with Parcak, a UAB College of Arts and Sciences professor, will be held from 5:30-6:30 p.m., and all tickets will include signed copies of the book. Ticket prices range from $35-$75. Parcak was the BMA’s 2018 Chenoweth lecturer and is excited to return to the Steiner Auditorium.

Attendees will  see Parcak’s enthusiasm leap off the page as she reads excerpts that convey what it is like to be a scientist traveling the world to study ancient civilizations. Parcak will also answer audience questions, which can be submitted to rebecca@globalxplorer.org until July 12.

Parcak is using this event to help raise local awareness and funds for GlobalXplorer and to further the GX team’s ongoing work to showcase the world’s diverse cultural history. In February, GX announced its fall launch of Expedition: India as the next destination for the citizen science platform.

GX is building a globally diverse, socially connected and mobile-based network of governments, philanthropic leaders, institutions and citizen archaeologists who are uniting their skills, experiences and financial resources to allow us to scale the GX platform and create a world of incredible promise for exciting new ways for our global community to interact through shared cultural experiences.