by Alicia Rohan
A UAB female student-athlete has been named a finalist for the NCAA Woman of the Year Award, recognizing her academic, athletic, leadership and community service success. 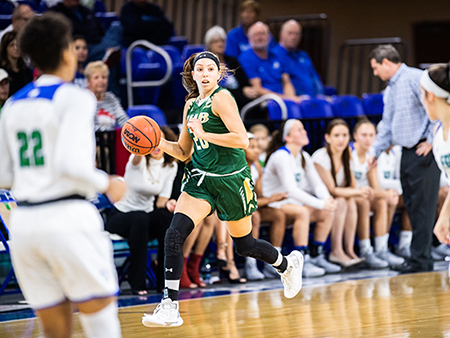 Deanna Kuzmanic, a recent graduate of the University of Alabama at Birmingham and former women’s basketball player, has been named a Top 30 finalist for the 2019 NCAA Woman of the Year Award.

Kuzmanic is the first UAB student-athlete since 2011 to be a Top 30 finalist for the award, which recognizes female student-athletes for excellence in academics, athletics, community service and leadership.

“The UAB Department of Athletics’ three core values are to win championships, graduate with honors and make a difference,” UAB Director of Athletics Mark Ingram said. “Deanna was able to achieve all three of those core values throughout her four years at UAB and we couldn’t be prouder of her for how she represented our university. She is truly deserving of this recognition and we are all excited to see her achieve in the next stage of her life.”

The Mount Prospect, Illinois, native graduated from UAB in the spring of 2019 with a Bachelor of Science degree in mathematics from the UAB College of Arts and Sciences and a minor in STEM education. Kuzmanic was a four-time C-USA Academic Medal recipient and three-time C-USA All-Academic team earner. Earlier this year, she was honored with the Conference USA Postgraduate Scholarship Award.

“Deanna’s leadership on the basketball court, hard work in the classroom, active volunteering in our community and bright future as a math teacher for our youth leave no doubt as to why she is a finalist for the NCAA’s Woman of the Year,” said UAB faculty athletics representative Frank Messina, DBA. “UAB is so proud of her.”

In the community, Kuzmanic completed more than 125 hours of community service as a student, serving as a reading mentor to elementary schoolers in the Birmingham area. She volunteered with Miracle League, United Ability, the YMCA and Susan G. Komen Race for the Cure. Kuzmanic was also a Top 30 finalist for the Senior CLASS award last season.

During her time at UAB, Kuzmanic earned Conference USA All-Conference Team honors twice and was part of the C-USA All-Freshman Team in 2015-16. The four-year starter played in every game of her career (128), the most in school history. Kuzmanic finished her career with 1,536 points, ranking 11th in program history. She ranks third in 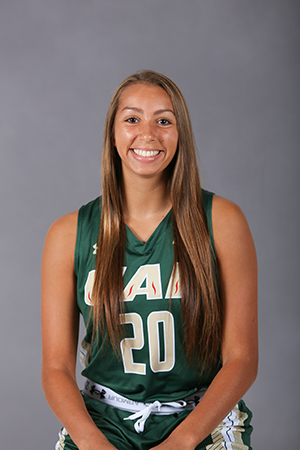 Currently, Kuzmanic is playing basketball in the Puerto Rico professionally and on the National Team, where she represented Puerto Rico in the Pan American Games taking home the bronze medal with her team. After her basketball career, she plans to teach high school math and coach basketball.

“I want to take my experiences as a student athlete to the high school level to show the aspiring athletes how important academics is as well,” Kuzmanic said. “One thing we learned in our STEM classes at UAB is the stigma around how people don’t feel like they’re capable of learning math and science. I want to encourage young people that they can achieve anything they put their mind to even if they don’t think they have the capacity to learn math at the highest level they can. I really want to be a positive influence in the lives of kids.”

“Deanna represents everything UAB athletics stands for,” said UAB women’s basketball coach Randy Norton. “In her four years with UAB women’s basketball, she served as a role model for her teammates both on and off the court. We are proud of all of her accomplishments in the classroom, community and sport. It is a tremendous honor to have her representing our program as a Top 30 finalist for the NCAA Woman of the Year Award. We hope the example she left sets a standard for our athletes for years to come.”

Nominees for NCAA Woman of the Year are selected from a pool of 585 women nominated by their universities. They represent college athletics from 20 sports over all three NCAA divisions.

In October, the pool will be narrowed to nine finalists — three from each division. The 2019 Woman of the Year will be named, and the Top 30 honorees will be celebrated, at the annual banquet in Indianapolis on Oct. 20.