by Alicia Rohan
Undergraduate students won awards for their research in virtual reality and child safety and in stabilization of proteins. 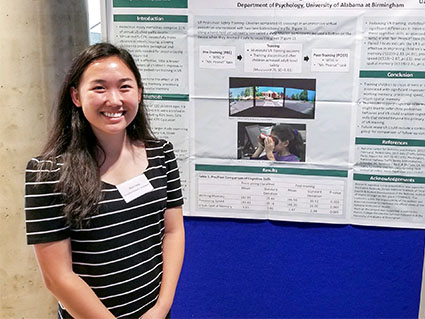 Kerri TangTwo University of Alabama at Birmingham students tied for first place for the Best Poster by an International Student at the 2019 Australasian Conference of Undergraduate Research. Kenneth Davis and Kerri Tang presented their posters at the conference in October and received a cash prize.

Davis, a Selma, Alabama, native, presented on the important role electronegative clusters play in the stability of proteins. His research found the occurrence of negatively charged clusters in RNA-binding proteins are not random and serve as a key element in protein stability. The poly-acidic, negatively charged tail is effective at protecting the protein from denaturation but offers little support toward the refolding process.

“The conference offered an amazing opportunity to connect and communicate with researchers in Australia,” said Davis, who is currently pursuing his Bachelor of Science degree in math and chemistry, with a minor in Japanese, alongside his master’s degree in math. “I was able to experience another culture while also learning more about the various kinds of research being conducted overseas.” 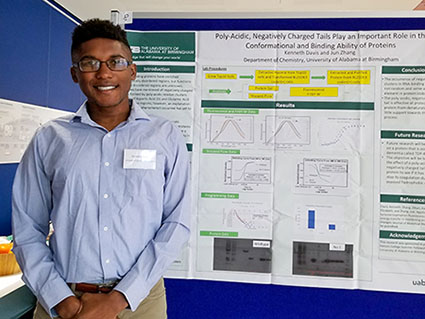