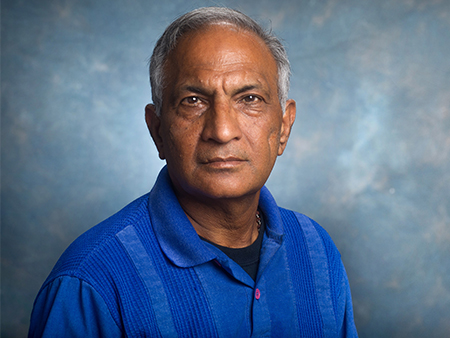 Regarded as the highest professional distinction for leading academic inventors, NAI fellows are recognized for their contributions to society.

Anantharamaiah has dedicated his nearly 50-year career to the advancement of peptide synthesis and protein analysis and is an international expert in the structure and function of plasma apolipoproteins. He holds appointments in the Comprehensive Center for Healthy Aging, O’Neal Comprehensive Cancer Center, UAB Center for AIDS Research, and UAB Nutrition Obesity Research Center. He is associate director of the Atherosclerosis Research Unit, and director of its peptide laboratory.

Among the university’s most patented inventors, Anantharamaiah holds 19 issued United States patents and 45 issued foreign patents in the field of peptide synthesis. Seventeen of his discoveries have been licensed, generating nearly $2.1 million in license fees and royalties to date. He has published 228 peer-reviewed papers, two books and book chapters and has published or presented more than 70 abstracts on apolipoprotein structure and function and peptide synthesis. He has served as an investigator on more than 30 grant awards throughout his career.

Development of his novel discovery shows significant potential as therapies for Alzheimer’s disease, heart disease, cancer, asthma, systemic inflammation and other diseases. A partnership with LipimetiX Development, Inc., a clinical stage biotechnology company, has resulted in development of potent Apo E mimetics that Anantharamaiah believes may be the most powerful lipid reduction agents yet discovered. The newer generation analogues insert into cholesterol-rich lipoproteins to direct them to the liver for removal, resulting in dramatically decreased blood cholesterol levels in animal models. The technology is currently being pursued worldwide as a therapy for treating hypercholesterolemia and is on track for first-in-human studies.

Anantharamaiah joins the seven UAB faculty previously elected to the NAI fellows program. The complete list of NAI Fellows is available on the NAI website.