1,000 dives into the cold Antarctic depth — a researcher’s lifetime achievement

by Alicia Rohan
Marine biologist Charles D. Amsler experiences spectacular views and a lifetime achievement with his 1,000th dive as an Antarctic researcher. 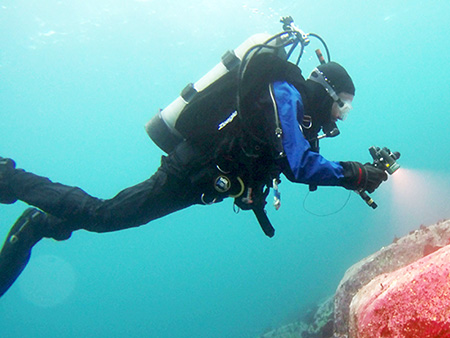 Marine biologist Charles D. Amsler experiences spectacular views and a lifetime achievement with his 1,000th dive as an Antarctic researcher.Many people wonder how the excess CO2 is affecting the planet and its atmosphere. Charles Amsler, Ph.D., a professor at the University of Alabama at Birmingham, continues to search for these answers as he dives into the depths of the Antarctic Ocean to closely examine ocean acidification.

“Some of the most important insights I have as an Antarctic marine ecologist have come from firsthand observations made underwater,” said Amsler, a marine biologist in the UAB College of Arts and Sciences. “There is no substitute for actually experiencing what the communities are like in their natural form firsthand.

Amsler made his first Antarctic dive at Palmer Station in December 1985 not long after the beginning of his first field season. He was able to make five dives that season to support a secondary project he was working on.

During his second Antarctic research season in 1989, Amsler made 40 more dives as part of the rapid response team assessing the impacts of an oil spill caused by the shipwreck of the Bahia Paraiso. It happened just over a mile from Palmer Station. Other major dives include:

Amsler has been researching climate change in Antarctica for 23 field seasons, where he has made dives in all but three of these seasons, and where he has dived as deep as 150 feet as a scientific diver. Most of Amsler’s dives study the chemical ecology of benthic organisms and the impact of ocean acidification on these organisms. Particularly, he looks at how benthic community structure varies with sea ice patterns along a north-south gradient of the WAP. 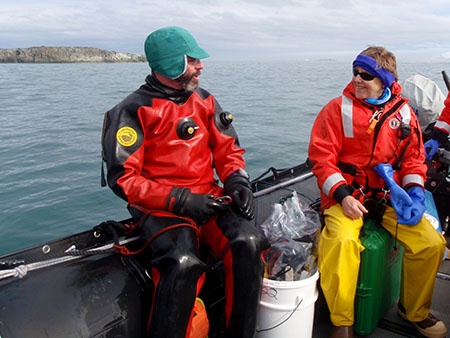 Amsler sits with his wife, Maggie Amsler, as they reflect the research conducted in the past 1,000 dives.Amsler is the third USAP diver and first USAP scientist to eclipse the 1,000 Antarctic dive mark.  Accompanying him on his 1,000th dive was his wife, Maggie Amsler, who is one of two other current or former USAP grantee divers with more than 500 dives in the Antarctic Ocean. Together, the Amslers lead research expeditions where students from UAB experience firsthand ecology research in Antarctica.

“It is important that students whose dissertation projects are based in Antarctica are able to dive in the communities they are studying,” Amsler said. “Providing them with at least one opportunity to dive in the Antarctic Ocean gives them an experience beyond the classroom.”

As the UAB Marine Biology team’s research continues, the focus is on small but very abundant and important shrimp-like animals called amphipods. The experiment currently underway also includes some of the seaweeds the amphipods live on that form massive underwater forests in the WAP.