Matt Graben was already an entrepreneur in Birmingham but needed to understand how business worked. The new entrepreneurship program at Collat taught him how to be a better thinker, he says.
Written by: Jared Jones
Media contact: Brianna Hoge 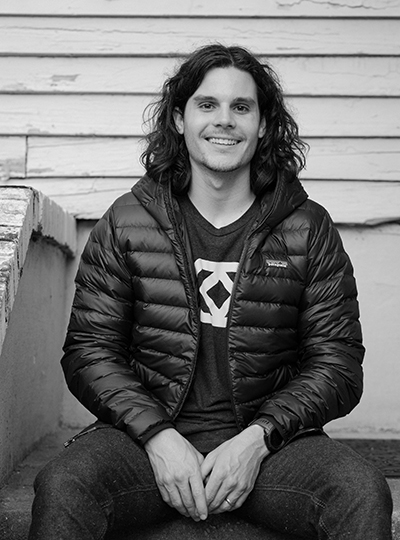 Matt GrabenFive years ago, Matt Graben dropped out of college. At the time, he was a junior at UAB studying finance. But he was more interested in actively launching a nonprofit than he was in his business courses, so he dropped out. During the next five years, he worked with other local self-starters to create more than 10 businesses, focused on everything from housing development to coffee sourcing and production, in the Magic City.

But while he was navigating his way around Birmingham’s entrepreneurial ecosystem, he met University of Alabama at Birmingham’s Patrick Murphy, Ph.D., UAB’s new Goodrich Endowed Chair for Innovation and Entrepreneurship. Murphy was developing a new undergraduate major in entrepreneurship in the Collat School of Business.

After talking with Murphy, Graben felt something was missing. He had practical experience from his startups, but he did not fully understand how business worked.

“I knew how to build the structure of a home, but I was missing my contractor’s license,” he said, likening building a business to building a home. “I had grown an appreciation of how businesses work and wanted to learn the theory behind it all.”

Graben returned to UAB and immersed himself in Collat’s entrepreneurial classes. He worked with Murphy to take all of the courses that, once approved, would be required by the major. The University of Alabama Board of Trustees approved the entrepreneurship major in June, and this week Graben will become the first graduate of the program.

The entrepreneurship program met all of his expectations, Graben says. He did not need to be sold on the value of being an entrepreneur — he already was one. He wanted to learn how to think on his feet and how to apply conventional wisdom to his entrepreneurial ideas.

Ultimately, he says, the program taught him how to be a better thinker.

For the past four years, Graben has served as creative director of Seeds Coffee Co., developing and implementing the Birmingham coffee shop and roaster’s marketing strategies. While there, he developed a new strategy for the business’s coffee subscriptions and increased growth 70 percent.

Now, he is focused on building the new venture Co-Trade Imports, a coffee importing company that focuses on creating fair and equitable partnerships between coffee producers and roasters. Co-Trade works with Central American coffee producers to determine fair pricing, market access, and support needed to promote sustainable farming practices that benefit both buyer and producer.

Although the COVID-19 global pandemic has impacted the coffee industry, Graben says he is staying hopeful, combining his business experience with the lessons he learned in UAB’s entrepreneurship program to propel Co-Trade forward.

“My biggest recommendation is just do it,” Graben said. “It’s one thing to have a good idea or story, but it’s another to know how the market works and how to turn your idea into a profitable business. The entrepreneurship program teaches you how business works.”