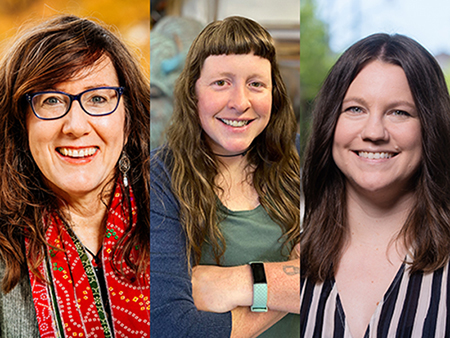 Kerry Madden-Lunsford, associate professor of English, Stacey Holloway, MFA, associate professor of sculpture, and Melissa Yes, program coordinator for the Department of Art and Art History, each were awarded a $5,000 fellowship from the Alabama State Council on the Arts during its June meeting. Three University of Alabama at Birmingham faculty members in the College of Arts and Sciences have been awarded fellowships for writing and visual arts.

Kerry Madden-Lunsford, associate professor of English, Stacey Holloway, MFA, associate professor of sculpture, and Melissa Yes, program coordinator for the Department of Art and Art History, each were awarded a $5,000 fellowship from the Alabama State Council on the Arts during its June meeting. The council awarded 21 grants in total. The recipients are encouraged to use them to set aside time to create art, improve their skills, pursue professional development and more.

Madden-Lunsford plans to use her ASCA fellowship to set aside time to complete “Werewolf Hamlet,” her newest middle-grade novel and follow-up to 2019’s “Ernestine’s Milky Way.” “Werewolf Hamlet” is a novel about friendship, control, adventure and letting go, following the story of fifth-grader Angus Jack Gettlefinger as he navigates his older brother Liam’s drug and alcohol abuse. She says she hopes children who read the novel learn not to blame themselves for a family member’s struggles.

“I want the kids who read this book to see Angus as an ordinary kid who gets into trouble all on his own, but who absolutely did not cause his big brother’s addiction,” Madden-Lunsford said.

With her grant funding, Holloway will research ethology, or the science of animal behavior, as it relates to human behavior and sociobiological instincts. Her previous work has incorporated connected elements. During the early days of the COVID-19 pandemic, she designed kinetic, prosthetic models made from alginate impressions of her own body to recreate actions of holding a hand, receiving a kiss on the cheek or giving a high five. Her 2018 exhibit at the Abroms-Engel Institute for the Visual Arts explored interspecies bonds and considered universal experiences of alienation, isolation and longing.

“These ideas have recently become new to my conceptual thinking, and I feel I have not been able to participate in experiences that would evolve these ideas into a stronger body of work,” Holloway said. “This future work could then lead to stronger national and international venues and exhibitions.”

Yes’ fellowship will support the production of two exhibits planned for 2022: a solo exhibit at the University of Montevallo and a collaborative project for viewing at the Gadsden Museum of Art. The collaboration, titled “Finches” after Atticus Finch, the hero of Harper Lee’s 1960 novel “To Kill a Mockingbird,” will be done with other artists from or with ties to Alabama.

Yes and her collaborators say in Lee’s 2015 novel, “Go Set a Watchman,” the adult character of Scout is much more critical of her father, Atticus, than she was as a young child in the 1960 novel. That realization inspired the name and theme for the interactive exhibit, featuring an interactive kinetic sculpture and video projections featuring dance, music, animations and narratives told by members of Alabama communities.

“Family and cultural legacies are often laced with both love and shame,” Yes said. “Our use of the plural form of Finch, ‘Finches,’ gestures toward an acceptance of that discordance and an affirmation of the need for progress and new types of heroes.”