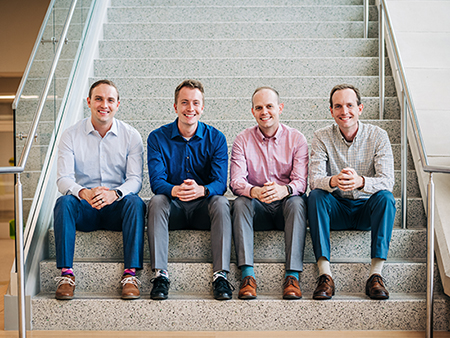 For one family, this technology embedded an unexpected legacy at the University of Alabama at Birmingham. Jeffrey, Eric, Stephen and Jonathan Frees are brothers who all graduated from the College of Arts and Sciences’ Department of Computer Science program and work in the field of computer science.

“I have been interested in computers for as long as I can remember,” Jeffrey Frees said. “Even as a young child, I was fascinated by trying to figure out everything you could do on our family computer’s ancient, text-based interface. With the explosive growth of the internet and technology in general through my high school years, a career in computer science seemed like a natural choice.”

Jeffrey Frees is the oldest of the four and works as a senior consultant at a global information technology consulting firm. He graduated from UAB in computer science with a bachelor’s degree in 2008 and a master’s degree in 2010. Throughout his time at UAB, he was chair of the UAB student chapter of the Association for Computing Machinery. Also, he competed with brother Eric at UAB’s competitive programming team before becoming a coach.

Jeffrey Frees says his amazing experience in the department gave his brothers the confidence to study computer science.

Eric Frees is a software engineer at a construction software firm. His interest in computer science grew in high school after he was exposed to the programming language Java, which led him to enter the UAB High School Programming Contest and, later, pursue a CS degree.

“There are a lot of opportunities for someone who can develop software,” Eric Frees said. “For example, 10 or 15 years ago, we did not all have a smartphone in our pocket. Now it’s a big area where development happens and new ideas start. Of course, the specifics of how the concepts are applied will continue to change; but there will always be a demand for new technology.”

For Stephen Frees, a computer scientist for an avionics analysis corporation, his interest in graphic design led him to study programming.

“In the process, I learned about using scripting to automate sequences,” Stephen Frees said. “It sparked my interest in what you could do with programming.”

Following in his brothers’ footsteps, Stephen Frees joined the Department of Computer Science at UAB.

“It appealed to me, and that’s when I truly knew what I wanted to pursue professionally,” he said.

Jonathan Frees, the youngest Frees brother and system programmer at a computer forensics research lab, says his path toward computer science was different. Many people assumed he chose computer science because of his brothers, but first Jonathan explored other options. After realizing the other majors did not interest him, he decided to join the computer science program.

“Things started to click after I took the intro CS class, and I fell in love with it,” Jonathan Frees said. “It was very fulfilling to solve a problem that many people had not solved. There is an elegant beauty to the way things are done in computer science. Even though you do many of the same things, you come back to something new, and there’s always something else to learn. You are never stagnant in that, and I am lucky to have found something I enjoy.”

The Frees brothers advise everyone interested in computer science to find an area that interests them and get hands-on experiences to augment the experience. Take every opportunity to learn, whether it is learning a new programming language or forming professional relationships.

To learn more about the computer science program at UAB, email csundergraduateprograms@uab.edu or visit the department’s website at uab.edu/cas/computerscience and fill out the form on the contact us page.