Fouad Fouad, Ph.D., laid the groundwork to ensure future success for the department through engineering education, research and community engagement. As he reflects on the rest of his career, Fouad says he is excited for the future of his field.
Written by: Grant Martin
Media contact: Yvonne Taunton 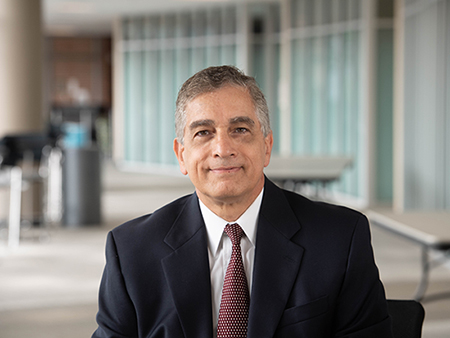 Fouad Fouad, Ph.D.
Photo by: Carson YoungCivil engineers understand the importance of building on a strong foundation, and for the past 25 years, Fouad Fouad, Ph.D., has focused on just that.

A member of the University of Alabama at Birmingham’s School of Engineering faculty since 1981, Fouad took over as chair of the Department of Civil, Construction and Environmental Engineering in 1996 and, for the next quarter-century, laid the groundwork to ensure future success for the department through engineering education, research and community engagement.

As Fouad nears retirement from UAB, colleagues say the department’s current and future success will be due in large part to Fouad’s leadership and the relationships he built over decades.

“It is rare in academia for someone to stay in a position of leadership at one institution for so long,” said School of Engineering Dean Jeff Holmes, M.D., Ph.D. “But at UAB, Dr. Fouad was able to lay a foundation for success and then build on it and foster sustainable growth that will benefit the school long after he is gone. He is leaving a department that is in great shape and is poised for a successful future.”

When Fouad first came to UAB in 1981, he did not imagine he would be a part of UAB’s long-term future. In fact, he saw his employment in Birmingham as a temporary stop on his way home to Egypt.

Fouad had come to the United States in 1975 to go to graduate school at the University of Texas and later at Texas A&M. His plan was to return home to Egypt and go into the construction business with his father, but a network of American engineers saw another path for him.

“Donald McDonald, the chair of the civil engineering department at Texas A&M, was a college classmate of Dr. Joe Appleton, the founding dean of the UAB School of Engineering,” Fouad said. “Up until that time, UAB had offered only a general engineering degree, but Dr. Appleton was in the process of creating departments, and he was looking for faculty with specialized expertise.”

Both men saw potential in Fouad, who as a young engineer already had expertise in both steel and concrete engineering — two related but very different components of construction engineering.

“My first love was steel construction and design, and that’s what I studied for my master’s degree at UT-Austin,” Fouad said. “For my Ph.D., I went to Texas A&M, where they were renowned for the work they did in concrete. I planned to move back to Egypt, but Dr. McDonald kept asking me to give Birmingham a chance, and I eventually agreed to come here on a trial basis.”

Once Fouad arrived at UAB, that versatile background proved to be just what the young civil engineering program needed.

“In my first few years, I taught 13 different classes, because I was able to instruct students in both steel and concrete engineering,” Fouad said. “To this day, I encourage students not to get locked into one niche, no matter how much they may love it. I think it’s always good to try to develop expertise in more than one area.”

Despite his success as a teacher at UAB, Fouad was not immediately ready to abandon his plan of returning to Egypt. In fact, during a visit home in the early ’80s, he called UAB to request a year of unpaid leave. “In the back of my mind, I knew I would never come back after the leave,” Fouad said.

Appleton denied the request, saying he needed Fouad to be present on campus for an accreditation visit.

“He asked me to just come back for one month, and then I could take a leave if I still wanted it,” Fouad said. “I came back, and within those few weeks, I realized that the opportunity I had here was better than anything I would find anywhere else in the world. So, I had to call my wife, who was still in Egypt with our young daughter, and tell her that I had decided to stay at UAB. I had no idea we would be staying 40 years.”

If Fouad could have seen into the future, the conversation may have gone much more easily. His wife, Mona Fouad, M.D., would join him and start her own successful career as a professor and researcher in the UAB School of Medicine. Their daughters, Nancy and Mary, would also earn multiple degrees from UAB.

“There were several reasons I decided to stay,” Fouad said. “One was that my father had passed away, so I couldn’t follow through with my plan to go into business with him. But I also realized when I came back for those few weeks how much easier it is to get things done in the United States than it is in other parts of the world. Even today, the U.S. is the easiest place to follow your dreams and fulfill your goals.”

In following his dreams at UAB, Fouad quickly built a network among fellow academics, UAB alumni and local industry leaders. That network served him well when he took over as chair in 1996 and began to grow the Department of Civil Engineering into something more than it had ever been.

“When I became chair, there was very little research going on in the department,” he said. “We didn’t have a Ph.D. program, a construction management program, or any certificate programs or online programs. Of course, those things couldn’t be built overnight; but we were able to add those things in time, and we developed the department into what I believe is one of the strongest arms of the School of Engineering. And we did all of that without ever once operating in the red.”

In recent years, the CCEE department has played an important role in UAB’s Grand Challenge, studying the built environment of Birmingham’s Titusville and Kingston neighborhoods. In addition to organizing faculty and student efforts, Fouad called on members of his advisory board, as well as other industry contacts, to provide services, materials and expertise to make major improvements to the two neighborhoods.

“We are a small part of the Grand Challenge, but I believe our role is very important to the overall goal of improving the health of these communities,” Fouad said. “The built environment is critical in so many ways to the health, safety and quality of life.”

Although he is retiring as department chair, Fouad plans to stay involved in the Grand Challenge. As he reflects on the rest of his career, Fouad says he is excited for the future of his field, which is just now beginning to embrace 21st century technologies that have revolutionized other fields.

“Civil engineering has been very stable for a long time, especially when you compare it to biomedical or electrical engineering, where technology is constantly changing,” Fouad said. “In recent years, though, that technology has come to civil engineering, and even though our engineering processes and calculations are unchanged, we are using technology to augment our work and to become more efficient.”

Examples include using drones to inspect bridges, using computer models to simulate the impacts of storms on the built environment and using sensors to monitor air quality.

“Civil engineering will always be popular because it is such a broad field with so many different types of employment opportunities,” Fouad said. “When I look at the young people who have entered the field in recent years and the way they are embracing innovative technologies, I am excited for the future.”