by Yvonne Taunton
After pursuing a degree piecemeal for 33 years, Jonathan Perz followed the footsteps of both his wife and his daughter to obtain a bachelor’s degree from UAB, becoming the family’s third UAB alumnus. 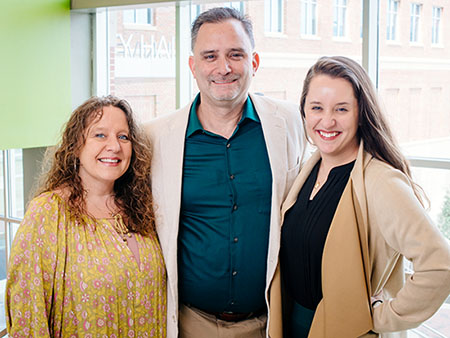 The Perz family: Sally Anne Perz, Jonathan Perz and Leah Perz Photo taken prior to the COVID-19 pandemic
(Photography: Steve Wood)
One year after his wife and his daughter graduated, Jonathan Perz will be the next family member to earn University of Alabama at Birmingham Blazer alumnus status.

Perz will graduate with a bachelor’s degree in computer science and business administration from UAB’s College of Arts and Sciences’ Department of Computer Science and Collat School of Business. Undergraduate students will graduate Saturday, Aug. 14, in a virtual commencement ceremony.

Now, nearly 33 years after starting his degree journey, Perz credits both his wife and daughter for inspiring him to complete what he started and to be a better student.

“It was always part of my wife’s plan to go back and complete her master’s degree when our kids were older,” Perz said. “Visiting UAB with Leah triggered my wife’s passion for school, which in turn triggered my desire to finally finish what I have been doing piecemeal for the past 33 years.”

Due to his being in the Air Force and having attended six other colleges throughout the years, Perz always had a goal of finishing his degree and then surpassing it with a master’s, which he will also obtain from UAB in spring 2022.

“During my tenure at UAB, my wife was incredibly supportive of my efforts, as I was already an extremely busy man,” Perz said. “I had to push through a lot of tired to get to this point, and she helped me to do that.

While going through the process, Perz worked as a full-time minister, co-owned a successful pest control company, served as chaplain for the city of Trussville and started a 10-hour a week internship with Abacus Technologies to gain more experience in cybersecurity.

“Although I have never been as busy as this in my life, I can honestly say it has been truly rewarding and I would not have pulled it off without my wife and all of my children to encourage me along the way,” Perz said.

Perz says he did not allow COVID-19 to get in the way of his goals and that he has been fully committed during these times.

“I wasn’t going to let something like a global pandemic get in the way,” Perz said. “We adjusted and pressed forward. I am little weary of Zoom; but other than that, it has all worked out fine.”

Perz gives huge credit to UAB for being there throughout his journey.

Perz says, with his wife now an adjunct in the English department at UAB, there is no doubt UAB will be a part of their lives for some time to come.

“UAB has offered me some incredible growth opportunities these past few years,” Perz said. “I have had the pleasure of being a teacher’s assistant for the Computer Science department for the past six semesters and will continue to do so. Even for an older guy, learning is learning.”

Perz says his instructors pushed him to learn new concepts that evaded him in his youth.

John Johnstone, professor in UAB’s Department of Computer Science, says he was lucky to have Perz in his freshman computer science course.

“It was refreshing to see such enthusiasm for a return to learning in Jonathan, the definition of a lean-forward attitude,” Johnstone said. “I eventually asked him to help TA this class, where he has climbed up the ranks to a senior TA position, always embracing more responsibility eagerly. We are all very proud of Jonathan.”

Mahmut Unan, Ph.D., assistant professor in UAB’s Department of Computer Science, says Perz has taken several of his courses and did an excellent job all the time.

“His hard work was always admired by the students and the professors,” Unan said. “I am proud to say that he is an inspiration not only to the students, but also for myself.”

Perz says, with his wife now an adjunct in the English department at UAB, there is no doubt UAB will be a part of their lives for some time to come.