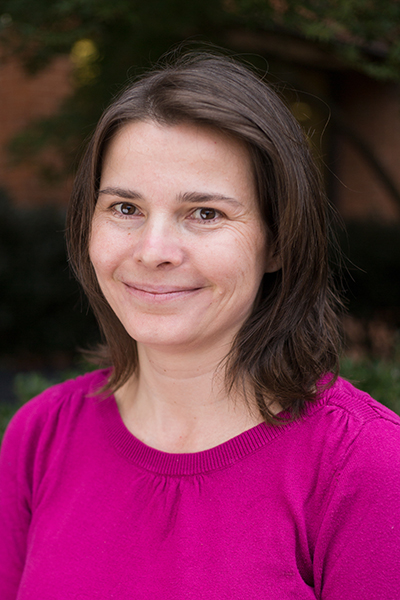 Research by Sylvie Mrug, Ph.D., will study how early life stress contributes to health disparities within different age groups.
(Photography: Bruce Southerland)University Professor Sylvie Mrug, Ph.D., at the University of Alabama at Birmingham was recently awarded a new R01 grant from the National Institute on Minority Health and Health Disparities to study the role of epigenetics in health disparities — for a total amount of $2.8 million.

According to Mrug, uncovering epigenetic drivers of health disparities may lead to the development of new biomarkers for early disease diagnosis, the ability to identify susceptible individuals at risk for adult disease, and the development of novel preventive and curative measures to reduce health disparities. The project will help explain how early life stress affects health across life.

The project, “Early Life Stress, DNA Methylation, and Health Disparities across Ages,” studies an epigenetic process called DNA methylation, which consists of a methyl group being added or removed in specific places on the DNA, which may change how these genes are expressed.

Mrug says previous studies have found associations between early life stress and DNA methylation but were limited in their methods and did not focus on health disparities or different age groups. She and her team will investigate the hypothesis that early life stress produces DNA methylation profiles that contribute to health disparities in early markers of chronic disease across several age groups, from infancy to young adulthood. They will also study whether these effects are modified by protective factors from the individual, interpersonal and community domains.

Mrug’s project began as a concept, funded as a full five-year research project of the UAB Obesity Health Disparities Research Center. Funding from the OHDRC provided vital data, which supported this successful application.

“This project will help us determine the biological mechanisms through which early life stress –– chronic stress experienced during childhood and adolescence — affects people’s health throughout their lifespan,” Mrug said. “Many types of chronic stress are more prevalent in individuals from racial/ethnic minority groups, and early life stress is one factor that contributes to pervasive health disparities that our society faces.” This project will help us explain how early life stress affects health across life and how we can reduce its detrimental effects.

“Comparing these three age groups will allow us to better understand the time course of biological embedding of early life stress, such as whether early life stress affects epigenetics more early in life, during adolescence or in young adulthood,” Mrug said.