by Shannon Thomason
In teaching the Intermediate Spanish for Health Professionals course at UAB, María Antonia Anderson de la Torre, Ph.D., wanted to work with a text that in addition to language skills also portrayed racial and cultural diversity. 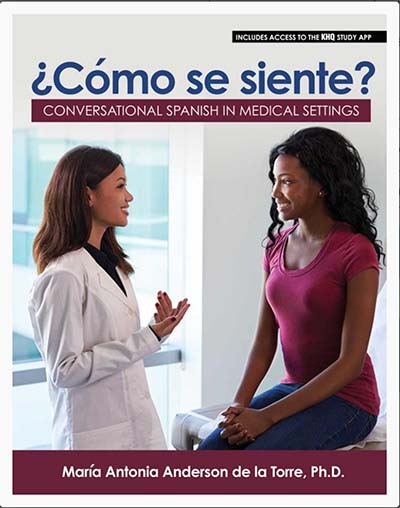 A new Spanish language textbook, conceived specifically for courses in Spanish for medical purposes and written by the University of Alabama at Birmingham’s María Antonia Anderson de la Torre, Ph.D., has been published.

The book, “¿Cómo se siente? Conversational Spanish in Medical Settings,” will guide intermediate Spanish students through real-life situations where they will be able to practice the language and prepare for interactions in Spanish with Hispanic patients. Anderson de la Torre is an assistant professor of Spanish in the UAB College of Arts and Sciences’ Department of Foreign Languages and Literatures.

The book will provide training in conversational Spanish, with a review of key grammar, medical interpreting and service learning. It was published with Kendall Hunt. Though the book was intended for use at UAB, it is open enough to be used in other universities throughout the country, she says.

Though the book Anderson de la Torre was using to teach Intermediate Spanish for Health Professionals courses helped students improve their language skills, she wanted to work with a text that also highlighted aspects she considers crucial: racial and cultural diversity. Her book was conceived specifically for that course, and it will officially be the book for the course Spanish for Health Professionals starting in spring 2022. This course is part of the department’s major in applied professional Spanish, the Spanish for business minor and the Spanish for Specific Purposes Certificate program.

She says she hopes it can make a difference for students who are pursuing a career in the medical field and want to improve their knowledge of Spanish and know more about the Hispanic patients they may be serving once they graduate.

“I want to help my students better serve, as medical workers, the Hispanic community and women,” Anderson de la Torre said. “I also want our Black female students to see other Black women as scientists and doctors, for there is a need to boost diversity in the medical field in our own state, and what better place to start that conversation than in college?”

The book is structured in a way that will allow them to follow the path of a patient, from the moment the patient arrives to the hospital, going through the doctor’s appointment, a hospitalization, until postoperative follow-up, with phone calls and emails. In the final chapter, students will be able to focus on their own medical field of study and the specific vocabulary and medical situations connected to it. This will be particularly useful because they will gain linguistic expertise and vocabulary and will enter specific situations connected to the medical area they are specializing in, she says.

These aspects align with UAB’s values of promoting diversity and actively incorporating it in the university’s courses and books, which she says she appreciates because it matches entirely her pedagogical principles.

She chose to place an emphasis on topics such as obstetric violence, and traditional medicine in Latin America, and deliberately provided multiple situations with, for example, male nurses or Black female doctors, to highlight and promote the need to talk about the lack of diversity in the medical field.

“Our student population is very diverse, and they need to see that diversity in the books we use in our classrooms, where there is representation on every level,” Anderson de la Torre said. “Every image of the book portrays a population that is diverse, and every situation has in mind topics that are important in the Hispanic population.”