Yabing Chen, Ph.D., is the first researcher at the Birmingham VA to receive this highest honor for a non-physician scientist. 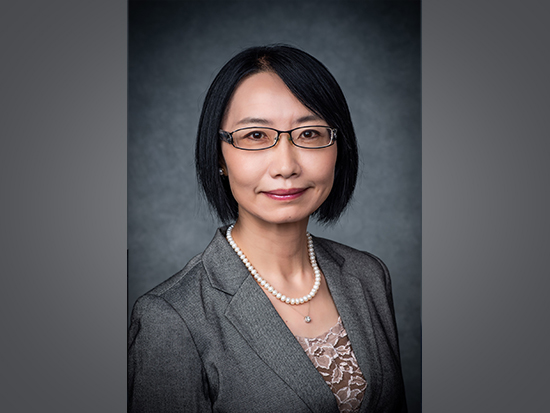 Now she has taken an even larger step — a Senior Research Career Scientist Award from the Department of Veterans Affairs that will give her seven more years of salary support.

These senior-level awards recognize VA health services researchers who are international leaders in their field, and only those who have been a research career scientist for at least five years can advance to the senior level.

“Chen is the first researcher at the Birmingham VA to receive this highest honor for a non-physician scientist,” said Louis Dell’Italia, M.D., associate chief of staff for Research at the Birmingham VA Medical Center and a professor emeritus in the UAB School of Medicine Division of Cardiovascular Disease.

Chen’s research focuses on major health burdens that include vascular calcification and stiffness, vascular aging, and vascular contribution to cognitive impairments. In detail, this includes studies of what molecular mechanisms of vascular smooth cell phenotypic modulation and reprogramming are at work during the pathogenesis of vascular disease, vascular calcification in atherosclerosis (colloquially called hardening of the arteries), arterial stiffness, diabetic vasculopathy and vascular aging. Her work has garnered continuous funding from the National Institutes of Health and the American Heart Association since coming to UAB in 2004.

Chen’s research discoveries in the areas of the reprogramming of vascular cells and the crosstalk between vascular cells in the development of arteriosclerosis have shed new lights on vascular calcification and aging.

Among Chen’s intriguing discoveries are:

Chen has published more than 70 papers in high-impact, peer-reviewed journals, and she received a Vascular Biology Special Recognition Award in 2018 from the American Heart Association for her outstanding contribution to vascular biology research.

Her dedication to teaching and mentoring has been recognized by a UAB Graduate School Dean’s Award for Excellence in Mentorship and a UAB School of Medicine Dean’s Excellence Award for Mentorship. At UAB, Chen holds the Jay M. McDonald, M.D., Endowed Professorship in Laboratory Medicine.

Chen earned her undergraduate degree at Fudan University, Shanghai, and her Ph.D. at Xiamen University, Xiamen, China. Chen joined the UAB Department of Pathology in 2004 and was promoted to associate professor in 2010 and professor in 2014. Chen also earned an MBA degree at the University of Vermont during her postdoctoral training.