by Shannon Thomason
Harper Nichols is not able to grip with one hand. In her colorful photo series, “holding / self portrait,” she shows all the things she holds throughout the day with her arm. 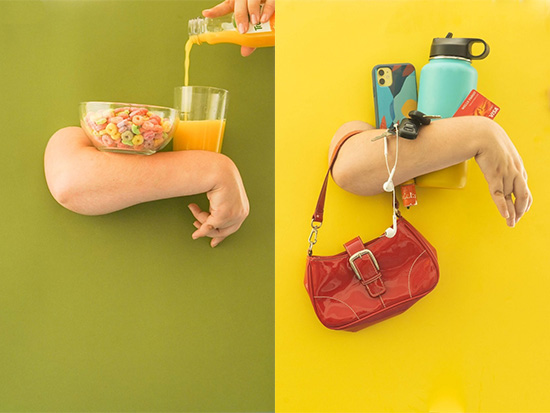 From left to right, "Dry Cereal and OJ," "Late to Somewhere I Don't Want to Be"Harper Nichols has always loved photography. But when the University of Alabama at Birmingham senior was assigned to do a self-portrait as part of her coursework, she did not want to do it.

How she chose to fulfill the project not only influenced her artistic practice — it also changed how she relates to other people.

Nichols, of Homewood, Alabama, does not like talking about her disability or the hardships that go with it, she says, and the idea of a self-portrait and having her body on display scared her.

“I have never liked my photo taken, specifically because of the way my arm looks due to my cerebral palsy,” Nichols said. “I knew I would hate the way I looked if my arm was in it.”

Instead, Nichols, 22, who will graduate this fall with a Bachelor of Fine Arts degree from the College of Arts and Sciences’ Department of Art and Art History, says she leaned into that scary feeling. She photographed only her arm as the subject.

See the BFA Exhibition at UAB’s AEIVA through April 30. A free closing reception is planned for 6-8 p.m. Friday, April 29. To tour the exhibition, or for more information, visit uab.edu/aeiva.

Because she is not able to grip things with one hand, her arm has become her own personalized holding device, she wrote in her project statement. The series, “holding / self portrait,” shows all the things she holds throughout the day with her arm.

For the process, Nichols set up poster board backdrops and the camera, stuck her arm through, held it in position, and shot many times to get one or two good pictures of each pose.

From left to right, "Forgot My Emotional Support Water Bottle," "Pickles on Sandwich"“It was an experiment, almost, in can I do this? Am I able to photograph myself, and hold all these things? Because I can’t hold objects in my hand,” she said. “But it also ended up being a way to say, ‘This is who I am, and this is what I do.’”

The way Nichols grew up — the way her parents raised her — “I was Harper, and I was a photographer, ever before I was a disabled person, and I never wanted people to look at me that way,” she said.

She has an artistic family: Her father is a photographer, as was her grandfather, and her mother and both sisters are artists. Photography is something she knew she wanted to do, but her interest grew in high school. She chose UAB to stay close to her family and have a home base. The more involved she became in the Department of Art and Art History program, and the more she met and grew to know the staff and students, the more she knew she wanted to earn her degree there, she says. 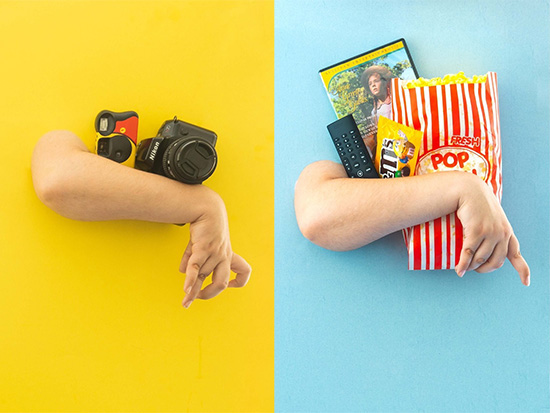 From left to right, "Reminder SD," "Fresh Pop"“It seemed to be a good way to home in on the kind of photography I like and gave me the opportunity to have an exhibition at the very end,” Nichols said. “It helped me to know I was able to have one-on-one conversations with professors, and say, ‘This is the art that I want to make; this is the art that I have made. How am I able to go from there and make it better?’ and actually graduate and go out into the art world.”

Assistant Professor of Photography Jillian M. Browning says she is much more interested in students’ showing her who they are with their art than following exact guidelines.

“It’s been so fun to see how Harper can make things for my class that still look like her art,” Browning said. “Harper has a very distinctive art style, so it’s been such an experience to see her mold the assignments I give her into her personal art practice.”

“Her ‘holding’ series started with a self-portrait assignment where she needed only two images and turned into an entire series that developed into some great in-class conversation and hopefully broadened Harper’s view on what her art could be,” Browning said.

Interested in a career in the visual arts? Use UAB’s Find your degree portal to learn more about degrees in the arts.

The support and compliments she got from friends and even strangers about her work in the months since she did the series was nice, she says. Now her work is centered on a portrait series of people which focuses on color, light and shapes. Those works can be seen in the BFA Exhibition on show at UAB’s Abroms-Engel Institute for Visual Arts through April 30. This month, she is excited to start work as a photographer fellow with Good Grit magazine.

Photographing the series focused on her arm did not change how she views herself, she says, but it did change the way she talks to other people about herself.

“Two years ago, I would never in a million years have been able to sit down and have this interview,” Nichols said. “Now it is more like, this is what I have, and this is what I go through, but this is not who I am as a person. It is something that affects me daily but does not define me as a human being.”