Graduating students make a splash while creating “The SpongeBob Musical”

by Shannon Thomason
Lighting designer Bailey Dumlao and co-director Devin Ty Franklin are two of the artists behind the scenes of Theatre UAB’s “The SpongeBob Musical.” 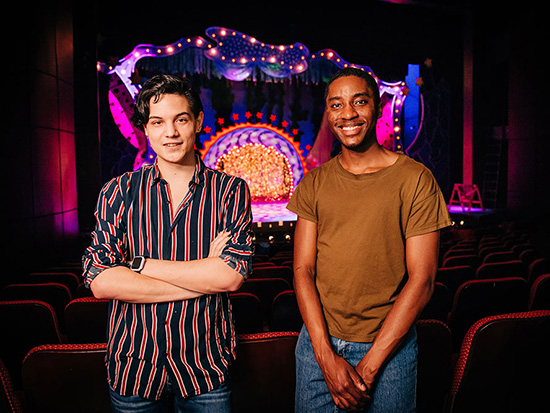 Dumlao designed the spectacular lighting for the musical. Franklin is co-directing the production with Valerie Accetta, head of UAB Musical Theatre.

Dumlao, 23, came to UAB to study performance, but ended up exploring directing, stage management and lighting design, and working extensively in costumes, lighting and sound, and performance for UAB’s productions. After many independent studies and productions at UAB, Dumlao feels they have just “scratched the surface of what is possible.” 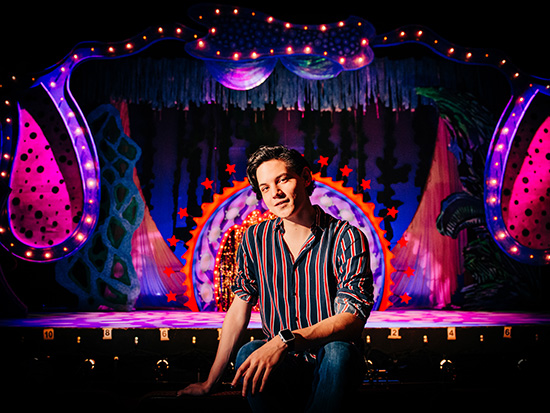 Bailey Dumlao (Photography: Andrea Mabry)“SpongeBob” is the epitome of the modern musical comedy, complete with an intense demand for lighting and scenic design, Dumlao says. The production has allowed them to experiment and collaborate with a team of professional designers and artists and pushes them to substantiate their ideas and compromise to reach their common goal.

Through the process, Dumlao has found a concrete sense of his personal design style that developed during past projects. He is also in the University Honors Program in the UAB Honors College and minors in history. His award-winning directing submission for the 2022 Kennedy Center American College Theatre Festival, scenes from “Sanctuary City,” dealt with United States Immigration laws and standards from 2001-2006 and necessitated extensive dramaturgical research into the immigration process.

Interested in a career in theater? Use UAB’s Find your degree portal to learn more about degrees in the arts.

“My time at UAB has allowed me to explore and investigate the art that interests me with a critical eye,” Dumlao said. “The Department of Theatre has supported my pursuit of equitable representation on stage and my research into the histories that interest me. My studies in directing and stage management have led me to a multitude of career options and opportunities.”

After graduation, Dumlao will work with Red Mountain Theatre Company as an assistant stage manager for “Kinky Boots,” and will return to UAB as an alumnus next spring to direct a production for the Theatre UAB 2022-23 season. These opportunities are steppingstones toward graduate school studies in directing, he says. 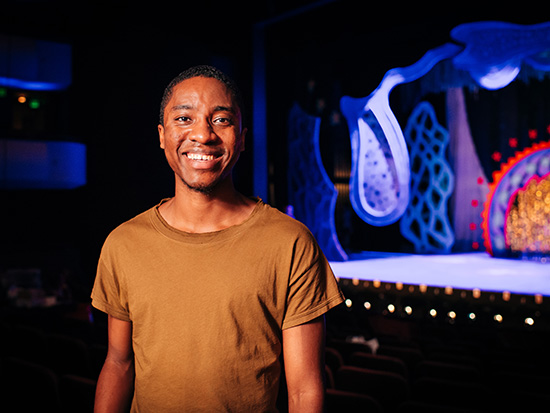 Devin Ty Franklin (Photography: Andrea Mabry)Franklin, 22, is headed to Ohio University this fall to start working toward a Master of Fine Arts degree in directing with a full scholarship.

For the co-director, the show has been “a beast” in terms of making 22 people look interesting onstage. However, this has encouraged exploration of new and different ways of existing in a space.

“The joy that pours out of this world we have created is so powerful,” Franklin said. “SpongeBob’s outlook encourages us to use our imaginations to build a new and more caring world. It is possible. Optimism paired with a child-like imagination is radical.”

The one thing most surprising about the show for Franklin?

“How bold the actors are, just in terms of their instincts — they have really strong instincts,” Franklin said. “I think that once one person is courageous it just creates this ripple effect, and then everyone … it becomes communal so quickly because everyone is so willing to just go for it, and I think that has really surprised me, honestly, because this show is a lot.”

Dumlao and Franklin are excellent examples of what is possible when students are focused and passionate about their discipline, said Department of Theatre Chair Kelly Allison.

“The Department of Theatre at UAB is a special program that encourages students to set goals they once thought unattainable,” Allison said. “This can happen in a safe environment that allows students like Bailey and Devin to take risks without fear.”

Franklin credits his mom, a UAB alumna, as “the reason he saw college as an option” and UAB as the destination for his undergraduate degree: “I’ve known about how diverse and top-tier the school has been since I was a kid.” Franklin plans to continue creating works that bring tenderness to the stories of marginalized groups in our society.

“Theatre UAB has been nothing short of an eye-opening and heart-expanding experience,” he said. “I absolutely feel prepared to enter my industry with the skills I’ve acquired these past four years, but I also have such a deeper connection with myself.”

Working with Franklin and Dumlao on “SpongeBob” has been so joyous, Accetta said.

“Both are wildly creative and have strong visions, but it is their warmth and collaborative spirits that have made the process so fun,” Accetta said. “I am truly grateful to have gotten to collaborate with them during their last semester at UAB.”