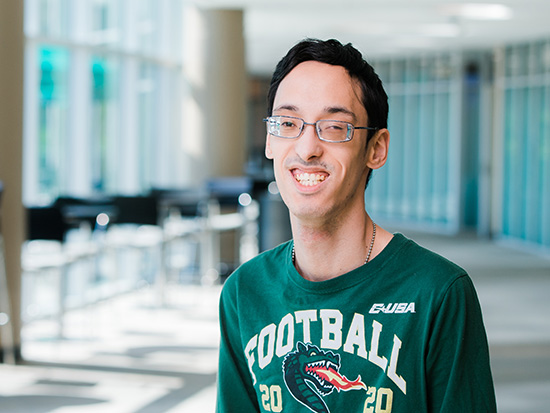 Photography: Lexi CoonDefying odds has become the anthem of Matthew Leong’s life, and now he looks to continue this theme by crossing the University of Alabama at Birmingham’s commencement stage during the 2022 spring commencement ceremony.

Born at 24 weeks’ gestation and weighing only 14 ounces, Leong’s premature birth led to complications including retinopathy of prematurity, an abnormal blood vessel growth in the light-sensitive part of the eye that can lead to bleeding and scarring. This condition led to Leong being blind in his left eye, but he was not going to let this stop him from going to college.

The Vestavia Hills, Alabama, native grew up knowing about UAB; but he became very familiar with the campus thanks to his mom, who completed her residency with the UAB Marnix E. Heersink School of Medicine, and Dawn DeCarlo, O.D., professor in the Department of Ophthalmology and Visual Sciences, who treated Leong at the UAB Center for Low Vision Rehabilitation.

After he graduated from high school, UAB was one of Leong’s top choices, and receiving a scholarship from the UAB Office of Undergraduate Admissions helped secure his dream.

Before starting his UAB journey in fall 2017, Leong experienced some nerves about attending college due to his disabilities. Once he arrived on campus, he discovered that the UAB Office of Disability Support Services would be there to help him every step of the way.

“The DSS office played a huge role during my time at UAB,” Leong said. “They were great to work with and have helped me receive accommodations for my classes, which allowed me to be successful.”

Learn how to start your UAB journey here.

During his time at UAB, the criminal justice major was involved in campus life and served as the assistant director of Gaming Advancement for the Good Games UAB club — a club that supports the UAB gaming community by hosting events centered around esports and tabletop gaming.

One of the highlights of Leong’s college career has been completing an internship with a private security agency to gain valuable experience before heading out into the real world.

“Security Engineers is one of the largest private security companies in the Southeast, and many of the employees and upper management are alumni of UAB,” said Martha Earwood, teaching assistant professor in the College of Arts and Sciences’ Department of Criminal Justice. “Their leadership worked with Matthew and provided a very determined student an experience that helped him make it to the finish line of his college degree.”

After commencement on April 30, Leong would like to pursue a career in the private security field and eventually continue his higher education journey through a graduate program.

“I am thankful to my family and friends, all of the professors in the College of Arts and Sciences, the DSS office, and Joey Richey at the Alabama Department of Rehabilitation Services for their help and support in helping me in my journey to cross the UAB commencement stage.”