A family affair: From NICU patients to UAB alumni

Years after spending 87 days in a neonatal intensive care unit, Tara Wood and her twin daughters are now UAB alumni who are using their life experiences to help others.
Written by: Laura Gasque and Hannah Echols
Media contact: Hannah Echols 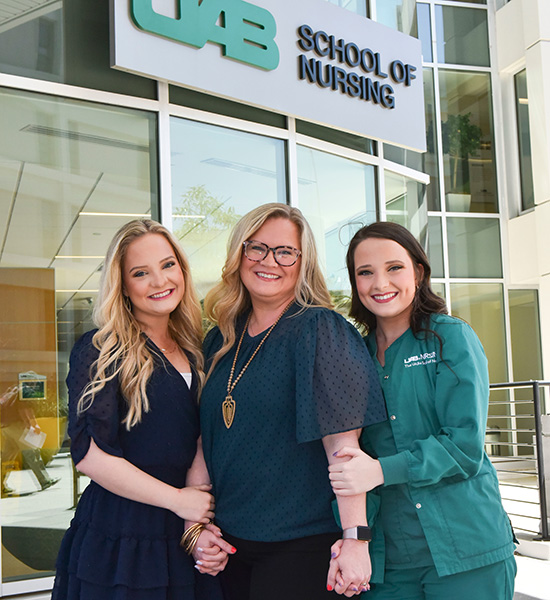 After spending 87 days in the NICU with her twin daughters, Tara Wood decided to pursue nursing. She is now an assistant professor at the UAB School of Nursing and her daughters, Jade and Taylor, will graduate from UAB in April 2022. Photography: Frank CouchTara Wood planned to become a teacher until she found herself giving birth to twin girls at 26 weeks’ gestation. They weighed under 2 pounds and spent 87 days in the neonatal intensive care unit.

“My world was rocked,” Wood said. “My babies were really sick. Both girls were on the ventilator for weeks. Their organs were premature, and you’re faced with all the things that can go wrong. Just knowing that every minute mattered, it really put you in a constant state of terror and panic, of not really knowing how your babies are going to survive, much less thrive.”

Wood remembers not being able to hold her children for months. During that time, her lifeline to her girls was the nurses and nurse practitioners. She realized then that she wanted to become a nurse and provide similar support to other families.

After working as a NICU nurse, Wood enrolled in the Master of Science in Nursing and Doctor of Nursing Practice programs at the University of Alabama at Birmingham School of Nursing. She is now an assistant professor in the School of Nursing and the coordinator for the Neonatal Nurse Practitioner Specialty Track, teaching and preparing future nurses to care for infants and families. One of those students — her daughter Jade England.

England, a fifth semester Bachelor of Science in Nursing student, graduates in April and will start her new job as a nurse in the Regional Neonatal Intensive Care Unit at the UAB Women and Infants Center.

“Growing up, I would see pictures of our tiny bodies covered in sensors and tubes,” England said. “We still have scars from where central lines were placed. I knew I needed to become a NICU nurse. I want parents to know that I was in their child’s place and, without giving false hope, show them that miracles can happen.”

The UAB family ties do not stop there. Taylor England graduates alongside her twin sister, Jade, this spring with a degree in psychology from the UAB College of Arts and Sciences with a minor in legal affairs and certificate in mental health. 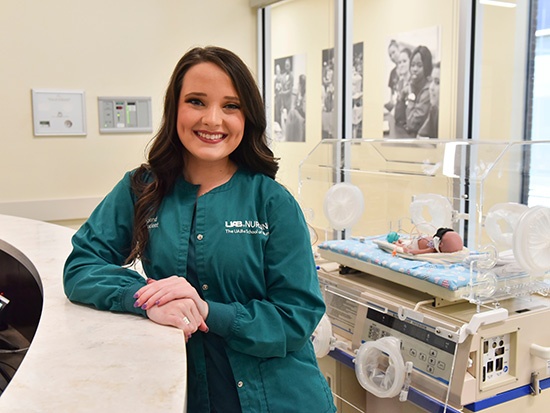 After graduation, Jade England will begin working in the Regional Neonatal Intensive Care Unit at the UAB Women and Infants Center.
Photography: Frank Couch“I enjoyed seeing the difference my mom made supporting families in the NICU, but nursing did not seem like the right calling for me,” Taylor said. “Through my classes, research opportunities and UAB organizations, I realized there were many ways to use my life experiences to positively impact someone else’s life. My goal is to one day be a child psychologist.”

During her time at UAB, Taylor participated in the Psychology Honors Program, where she gained firsthand research experience studying ADHD in children, a condition her brother was diagnosed with when they were younger. She also served as a TrailBlazer, giving campus tours to prospective students and their families.

For Wood, it is sometimes hard to believe her tiny, fragile NICU babies are graduating from college and starting their careers. 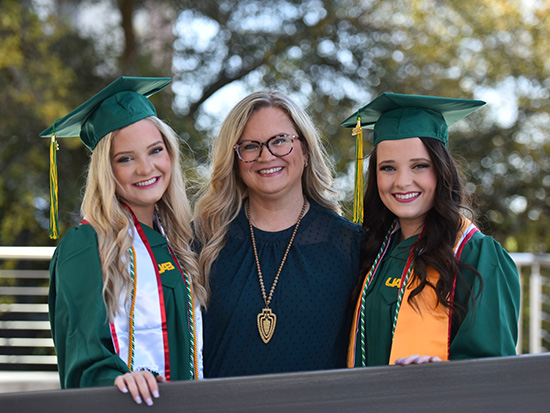 Both Taylor (left) and Jade (right) hope to follow in their mom's footsteps and continue their academic careers at UAB.
Photography: Frank Couch“I’m a proud mom, and I want to share them with the world because I think they were born to do great things,” Wood said. “They have servants’ hearts, and they want to help and do good. I’m thankful for UAB because I think UAB has been a place that has really poured into them and allowed them the opportunity to do for others.”

While their undergraduate chapter closes, their UAB journey is far from over. Jade wants to follow in her mother’s footsteps and plans to return to school next year to start the Post-BSN to DNP Nurse Practitioner Pathway to earn her Doctor of Nursing Practice degree. One day, she hopes to teach alongside her mom. Taylor plans to finish an internship to earn her mental health certificate and hopes to return to UAB in the future to continue her academic career.