by Shannon Thomason
Amanda Grace Waller, 22, was named a national finalist for the KCACTF’s Barbizon Award for Excellence in Lighting Design and was one of two students nationally given a special achievement award. 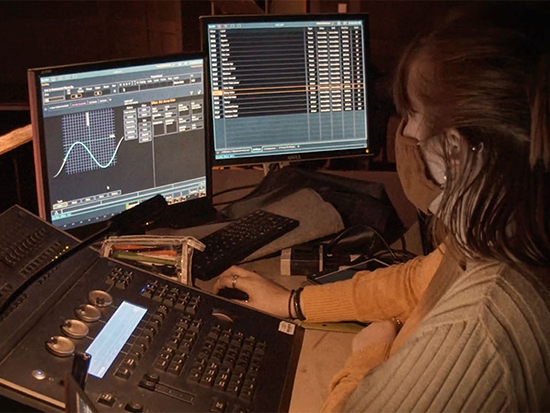 Amanda Grace Waller at work on "Much Ado About Nothing"A University of Alabama at Birmingham theater student was honored for her work by the Kennedy Center American College Theater Festival.

Amanda Grace Waller, 22, was named a national finalist for the KCACTF’s Barbizon Award for Excellence in Lighting Design for the production “Much Ado About Nothing,” presented in fall 2021 by the College of Arts and Sciences’ Department of Theatre. Waller also received a special achievement award at the national level — given to just two students — for her work, as well as a cash award.

Students compete at the regional KCACTF level, and winners selected there compete in the national festival. Waller was one of a group of eight regional winners from around the country.

The national festival was virtual, which ended up being a positive for Waller as she was busy working as stage manager for Theatre UAB’s spring production of “Spongebob the Musical.”

“Much Ado About Nothing” was the first mainstage show she got to fully design because of COVID, Waller says. Go behind the scenes of the show with the College of Arts and Sciences. Waller worked as an assistant stage manager for the Theatre UAB production “The Glass Menagerie” in February 2020. She was also on the crew for “Disconnect.”

“Truthfully, with 'Much Ado' being the first big show I designed, I just wanted it to look good and to feel good about it when it opened,” Waller said.

Assistant Professor Jack Cannon was her first theater teacher at UAB, and he directed “Much Ado About Nothing.” With that show’s being her last project, “it just kind of felt like everything came full circle,” Waller said.

“Jack is a fantastic director to work with,” Waller said. “He gave me constructive criticism on what was working. Rather than saying ‘I don’t like this’ and not telling me why, he had a vocabulary. That was really helpful as a lighting designer. I also had a lot of good support from Professor Kelly Allison and David Page, master electrician.”

Waller, from Johns Creek, Georgia, is working this summer in lighting design, carpentry and more for summer productions at Shenandoah University’s Shenandoah Conservatory in Winchester, Virginia.

Her advice to younger students in theater is, if you are unsure what to do, try everything.

“Do everything, try everything out, apply for everything, but don’t overwhelm yourself,” Waller said. “Don’t say yes to something just because someone needs you to say yes. Say yes because you have the time and want to do it.”