by Shannon Thomason
This year, Theatre UAB alumna Skye Geerts Strauss earned her Ph.D. from Northwestern, won a USITT Merit Award and will begin teaching this fall at Baylor University. 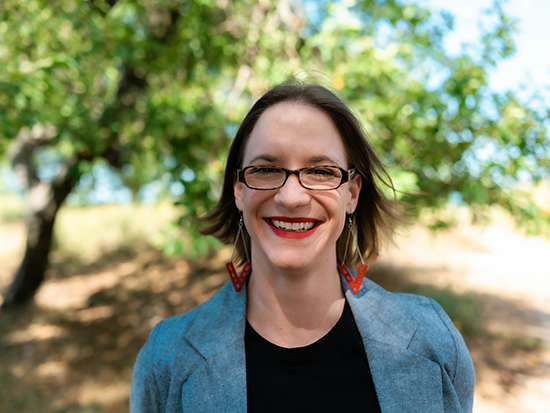 When Theatre UAB graduate Skye Strauss earned her degree, she did not set out to be an award-winning theater scholar.

Strauss, known then as Skye Geerts, started her career as a theater artist, earning a degree from the University of Alabama at Birmingham College of Arts and Sciences’ Department of Theatre in acting in 2008 with honors and working in costume construction and design.

Flash forward to 2022, she earned an Interdisciplinary Ph.D. in Theatre and Drama from Northwestern University, was published and honored with a national award, and starts her first university teaching job this fall at Baylor University in Waco, Texas.

As it turns out, an observation by an esteemed professor was prescient. She finished her undergraduate degree primarily focused on costume technology and design, but also really enjoyed theater history classes. In one of the last groups to take a class from Professor Emeritus Ward Haarbauer before he retired after 39 years of service, he told her, “I know you think of yourself as a costume designer, but I also think you could be a really good theater scholar.”

It turns out he was right.

Strauss was honored for her outstanding publication in the field of design and production for the performing arts. The United States Institute for Theatre Technology, Inc., recognized Strauss with a Herbert D. Greggs merit award for her 2021 article “The Workings of a Wild Mind,” which was published in its journal, Theatre Design & Technology. The award promotes innovative, in-depth writing about theater design and technology in the journal.

She will also now be a member of their editorial board. When someone comes in with a topic they think has potential to be a good article but needs a shift in tone or additional research, “I will be one of the people who is on deck to help them make that into a published article,” Strauss said.

“The Workings of a Wild Mind” was born from a research trip to Cornwall and London, England. Strauss was awarded a USITT graduate research grant for her proposal on the recently defunct Kneehigh Theatre Company, an artist-led, Cornwall-based theater company that toured nationally with award-winning shows and performances. A Northwestern University graduate research grant helped her visit both cities for a five-week international research trip.

Kneehigh Theatre was an international touring theater company founded in 1980 by Mike Shepherd and based in barns on the southern Cornish coast; the company announced it would close in June 2021. The company’s productions, including those directed by Emma Rice, were often based around myths, fairy tales and legends, and used puppetry, live music with folk instruments and visual imagery. Early productions were performed in village halls, marquees, cliff-tops and quarries.

Strauss credits an archivist, who, after hearing her request to study Kneehigh’s design and collective creation process, asked whether she wanted to see Bill Mitchell’s papers. Mitchell had worked with and designed for Kneehigh, and ran a company called WildWorks that did site-specific theater. The archivist arranged for Strauss to meet Mitchell’s partner Sue Hill, who then offered her a tour of his home attic studio.

Although it did not fit into her dissertation, she turned the experience into the article, written in the first person.

“For me, the most fun parts of doing the extensive graduate research were traveling places and meeting people, digging around in the scraps of the archives, and trying to tell stories out of that instead,” Strauss said. The article was important to her for many reasons, so winning the merit award was an unexpected treat.

Even during her time as an undergraduate, Strauss says she was always doing too much research for any project; she would know the script inside-out in a way she was not expected to, and fill notebooks with research. After completing a master’s degree in theater and performance studies from Queen’s University Belfast, Northern Ireland, as a Rotary Scholar, she returned to Alabama to work and then took the leap to Chicago. After much work, thought and study, she decided to pursue a Ph.D. in a program that would appreciate her background in professional theater. After two years of investigation, she found three programs, and chose Northwestern.

Her journey was a much more winding road than those of her Ph.D. colleagues. Artistic practice and academic research in theater are generally two separate fields, but Strauss wants to keep both alive in her career. That was something modeled for her at UAB by professors like Karla Koskinen. Some of Strauss’ creations and background can be found at www.scholarartistskye.com.

“My teaching and research will always hold onto me; but I can occasionally make one really, really cool thing, and give it to whoever needs it for their show or their spectacle,” Strauss said. “The artistic practice and the writing get closer and further apart in phases, so now those things are at a point where they are leading back together again.”