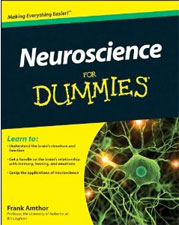 Franklin Amthor, Ph.D., UAB College of Arts and Sciences, has simplified the explanation of the nervous system so that anyone — including dummies — can understand it. His new book, Neuroscience for Dummies, is available on Amazon.com with delivery set for mid-December.

“This book is designed to be a readable reference for questions about the brain,” says Amthor, a professor in the UAB Department of Psychology. “It also has the depth to be a valuable tool for undergraduates or professional school students dealing with subjects having neuroscience content.”

The book is designed to cover, in an understandable form, many of the issues in introductory neuroscience classes. It delves into how individual neurons work and how neurons mediate memory, learning, emotions and the brain. In other words, it treats complex information at a dummies level.

“Dummies editors enforce a particular language style and level, modularity and clarity far beyond anything I’ve encountered in writing for scientific journals. It was by far the hardest writing I ever did,” says Amthor. “They will never let you get away with using unfamiliar terms that you don’t explain clearly. I became a much better writer during this process.”