Elewski will be the first holder of an endowed professorship in graduate education. 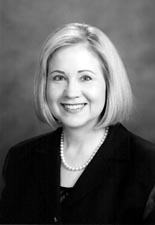 The University of Alabama System Board of Trustees approved the conversion of the James E. Elder, M.D., Endowed Support Fund for Graduate Education to the James E. Elder, M.D., Endowed Professorship for Graduate Education and named Boni E. Elewski, M.D., professor of dermatology, the first holder during its meeting April 13, 2012. Elder earned dental medicine and medical degrees from UAB and rejoined the staff in 2005.