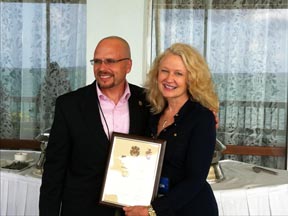 Sheri Spaine Long, Ph.D., professor of Spanish in the UAB College of Arts and Sciences, has been inducted into the Order of the Discoverers, one of the highest honors of the National Collegiate Hispanic Honor Society Sigma Delta Pi.

Long received her honor at the 94th annual conference of the American Association of Teachers of Spanish and Portuguese in San Juan, Puerto Rico.

Her “exceptional contributions to the profession and her loyal promotion of the ideals of Sigma Delta Pi have earned her this distinction,” according to the society’s press release. Past inductees include renowned literary figures such as Vanessa Montfort, Antonio Porpetta, Carmen Laforet and Carmen Conde.