by Shannon Thomason
The American Mathematical Society has named the UAB professor to its inaugural class of 1,119 fellows from around the world.

UAB Professor Rudi Weikard, Ph.D., chair of the Department of Mathematics, has been named a Fellow of the American Mathematical Society for 2013, the program’s first year. 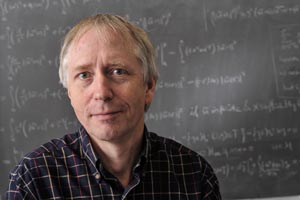 The inaugural class of 1,119 Fellows from around the world represents more than 600 institutions.

The Fellows of the AMS designation recognizes members who have made outstanding contributions to the creation, exposition, advancement, communication and utilization of mathematics. The goals of the program are to create a larger class of mathematicians recognized by their peers as distinguished for their contributions to the profession, and to honor excellence, according to the AMS web site. The program also strives to support the advancement of more mathematicians in leadership positions in their own institutions and in broader society.

AMS President Eric M. Friedlander says the AMS is the world’s largest and most influential society dedicated to mathematical research, scholarship and education. Recent advances in mathematics include solutions to age-old problems and key applications useful for society.

“The new AMS Fellows Program recognizes some of the most accomplished mathematicians — AMS members who have contributed to our understanding of deep and important mathematical questions, to applications throughout the scientific world, and to educational excellence,” he says of the new program.

Weikard’s accomplishments include results in semiclassical quantum mechanics, integrable systems and inverse problems. Some of his results were published in Acta Mathematica, the Bulletin of the American Mathematical Society, Communications in Mathematical Physics, and Inventiones Mathematicae, which count among the most prestigious mathematical journals. He earned his doctoral degree in 1987 from the Technische Universität Braunschweig in Germany. He came to UAB as an assistant professor in 1990 and became a full professor in 1999. He serves as department chair since 2001.

“UAB has provided me with a rewarding career by letting me pursue my research interests,” Weikard says. “I am most grateful to my colleagues in the mathematics department who have created a stimulating environment and to my research collaborators whose knowledge and persistence made some accomplishments possible in the first place.”