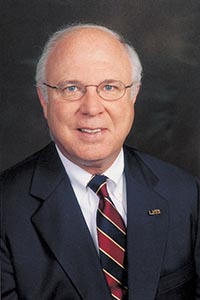 The National Optometry Hall of Fame, administered by Optometry Cares® – The American Optometric Association (AOA) Foundation, will induct Amos during a ceremony at Optometry’s Meeting® on Thursday, June 27, 2013 at 7 p.m.

New inductees are determined by a selection committee that represents the AOA, the Association of Schools and Colleges of Optometry, the College of Optometrists in Vision Development, the National Optometric Association and the American Academy of Optometry.

“I am humbled and honored to have been selected for induction into the National Optometry Hall of Fame,” said Amos.

Amos received his B.S. and O.D. from the Illinois College of Optometry and his M.S. from Indiana University. Amos joined the U.S. Air Force, and while serving as an optometry officer, was awarded the Bronze Star for Meritorious Service in Vietnam.

In 1972, he joined the faculty of the UABSO, where he went on to publish two major textbooks and papers in every major optometric journal, as well as present hundreds of continuing education courses across the country.

Amos served six years as the chair of the department of optometry and director of the professional program for the UABSO. He was named interim dean in 2000 and dean in 2003, a position he held until 2009, shortly before he retired.

During his tenure, Amos had numerous accomplishments that included the development of one of the first approved residency programs at a school of optometry, a program that has served as a model for other schools. Amos brought about major improvements in the school’s infrastructure, from curriculum to administration, teaching and facilities.

Amos has been selected as “Optometrist of the Year” by the state, regional and national optometric associations. He received the Distinguished Service Award from the AOA and was elected as a “Distinguished Scholar” of the National Academies of Practice.

In 2004, he was named the UAB National Alumni Society Honorary Alumnus of the Year. He received honorary doctorate degrees from the Southern California College of Optometry and Salus University in 2010. He was the recipient of the Life Service Award from the American Academy of Optometry in 2012.