by Meghan Davis
Through a UAB professor’s crowdsourcing efforts, volunteers are able to provide textbooks to visually impaired children in Bangladesh.

University of Alabama at Birmingham (UAB) professor Ragib Hasan, Ph.D., continues to reach out across the world to help children in need. Hasan, assistant professor of Computer and Information Sciences and director of the UAB SECuRE and Trustworthy Computing Lab (SECRETLab), won a Google RISE Award in early 2013 for the Shikkhok Project, an education platform that provides free online courses to rural and disadvantaged students in Bangladesh and India. 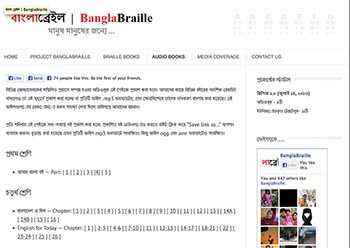 The BanglaBraille websiteA few weeks ago, Hasan read a news report from Bangladesh that many visually impaired children had not received textbooks six months into the school year, despite a promise from government officials for new Braille textbooks. Delays from book publishers and the expense of printing in Braille through the government’s single Braille printer have kept many of Bangladesh’s visually impaired students from being issued textbooks, the report states.

“I was touched by the story, in particular the sad comment from one kid that all his school buddies got new books, but he didn’t,” Hasan said.

In response, Hasan harnessed the power of crowdsourcing. He set up a Facebook group called BanglaBraille (Bangla is the local name of the Bengali language). He said he was not sure where to start, but figured out a system to have volunteers type out the textbooks page-by-page and convert the textbooks in publishers’ proprietary formats into the unicode needed to print them in Braille. Within a few hours, Hasan’s group had more than 400 volunteers.

The project can be found online at www.banglabraille.org. The $10 Hasan spent to set up the website has been his only expenditure thus far.

As volunteers continue to make textbooks printable in Braille, others are recording audiobook versions that can be distributed even faster. Narrators have included everyone from students to famous TV actresses.

As of July 18, BanglaBraille has more than 20 textbooks digitized and 12 audiobooks with almost 60 hours of narration ready for distribution. The Facebook group has 2,500 volunteers. The project has been covered by media in Bangladesh and internationally.

His next steps include plans to raise funds to print and distribute more Braille textbooks, load audiobooks in cheap mp3 players and on memory cards that can be used in cell phones, and add audiobook versions of literary works, as well as university-level textbooks.

“After starting this project, I have received letters from parents of visually impaired children,” Hasan said. “One father wrote to me expressing his gratitude. His 13-year-old daughter is visually impaired from birth but is very talented. Unfortunately, there are no schools for the visually impaired in their area, so his daughter cannot go to school. He thanked me for the audiobook project, as he can now download the books into a mobile phone and play the textbook to his daughter.

“This shows how strong crowdsourcing can be to create positive social change,” Hasan said.