by Jim Bakken
UAB Associate Professor Cynthia Ryan will be honored for her community work and advocacy.

University of Alabama at Birmingham Associate Professor of English Cynthia Ryan, Ph.D., has been named the 2014 recipient of the Odessa Woolfolk Community Service Award for her work in breast cancer awareness, outreach and advocacy.

She will receive the honor during the Faculty Awards Convocation at 4 p.m. Wednesday, April 2, at t 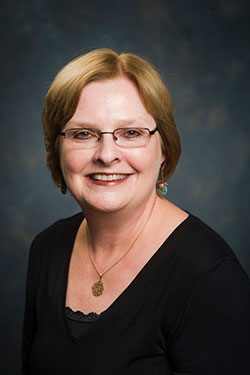 Odessa Woolfolk is an educator and civic activist who served UAB for 21 years, and also spearheaded the creation of the internationally acclaimed Birmingham Civil Rights Institute. UAB established the honor in her name to recognize a member of its faculty who has rendered outstanding service in the Birmingham community in the areas of education, economic development, health care delivery, the arts, social services, human rights, and/or urban and public affairs.

Ryan, a breast cancer survivor, has worked tirelessly as an advocate for awareness of the disease. Not only does she tell her candid story of survival through her blog Cancer Hits the Streets, she also writes stories about female survivors from around the world, championing their courage.

Ryan also founded Street Smarts™, a breast cancer awareness program that targets Birmingham’s homeless women in partnership with Susan G. Komen North Central Alabama. She teaches the women about positive body image and provides them with information about breast cancer risk reduction, screening and treatment options. Ryan’s work has been recognized across the country and has been featured on national television.

She collaborated with photographer David Jay for The Alabama Project, an exhibition of photographs that reflect the disparities that persist among women experiencing breast cancer. Ryan wrote the commentary for the project based on interviews she conducted with survivors throughout the state. It now hangs in the Wallace Tumor Institute and was developed into a traveling exhibit, with the first showing at The Freedom Center in Cincinnati, fall 2013.

Ryan’s nominees have called her a woman of “selfless dedication.” Claudia Hardy, program director for the UAB Deep South Network for Cancer Control, credits Ryan for how she, “single-handedly brought attention to underserved women who have been impacted by breast cancer.”

Ryan says she was thrilled to receive this honor.

“My outreach efforts depend on the help of many in our community, including cancer survivors from all walks of life, colleagues, students and organizations throughout the city,” she said. “I am grateful for their continued support and hopeful about the work we are doing to make a difference in the lives of individuals experiencing cancer.

“I want to thank Ms. Woolfolk for her tireless efforts in the Birmingham community to create a more equitable and just society,” Ryan said. “Her life’s work challenges each of us to do what we can to improve the lives of others, and I am honored to receive an award in her name.”