by Jim Bakken
Michael Saag, M.D., helped transform the deadliest virus in human history into a manageable chronic disease, and he is now receiving a top honor. 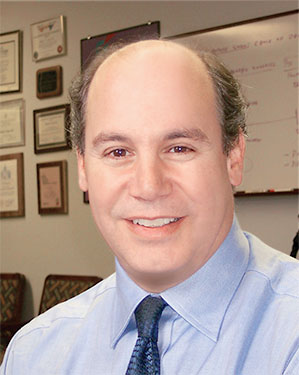 A virus that once was the most deadly in human history has since been transformed into a manageable chronic disease. Helping to lead those efforts is one University of Alabama at Birmingham physician who is being nationally recognized for his contributions to the field.

Michael Saag, M.D., professor of medicine and director of the Center for AIDS Research, is one of three doctors receiving the Clinical Excellence Award at the ninth annual National Physician of the Year Awards by Castle Connolly Medical Ltd. The award recognizes physicians who exemplify excellence in clinical medical practice, have made major contributions during the course of their medical careers and are expected to do so in the years ahead.

“It’s clearly a huge honor to receive this award from such a well-recognized and well-respected group, and it’s one that I feel compelled to share first with all of the providers at the 1917 Clinic,” Saag said. “It’s not a single person who provides care that gets recognized; it’s an entire system and team. From my perspective, this honor is for them as well.”

Castle Connolly Medical Ltd. annually solicits special nominations from thousands of physicians across the country and the leadership of more than 1,000 hospitals to identify the list of extraordinary physicians who have made significant strides in their areas of medicine.

“I think this honor also is representative of all the people who provide HIV care around the country,” Saag said. “To my knowledge, this is the first time this organization has honored an HIV care provider, and my sense is that they could have picked any one of more than 100 equally qualified people within the HIV community of providers. I feel honored they chose me.”

The awards ceremony will take place March 31 at The Pierre Hotel in New York City, starting at 6:30 p.m. with a reception, followed by dinner and the awards presentation.