by Jim Bakken
UAB epidemiologist Christine Skibola used genomics to identify a DNA variant that makes some susceptible to leukemia. 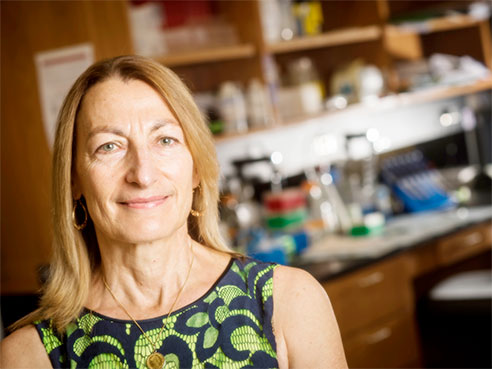 One University of Alabama at Birmingham epidemiologist, whose work has been recognized nationally, is using genomics — the study of a person’s genes — in hopes of preventing a form of cancer using personalized medicine.

The genetic makeup of all human beings is 99.9 percent identical, with the differences in the remaining 0.1 percent holding important clues about the causes of diseases, according to the National Human Genome Research Institute. Genomics helps researchers gain a better understanding of genes that can lead to both improved treatments and disease prevention.

Christine Skibola, Ph.D., professor in the Department of Epidemiology and senior scientist at the UAB Comprehensive Cancer Center, utilizes a broad background in molecular epidemiology, toxicology and genomics, to work toward identifying genetic and environmental risk factors of chronic disease.

“I’m very excited about the work I do, and my biggest reward will be that someday my work will aid in the prevention or treatment of cancer,” Skibola said. “If we can identify individuals at high risk of cancer, we can provide better screening and perhaps prevent catastrophic outcomes.”

Some of Skibola’s most recent, high-impact work was chosen as a top publication for 2013 by the National Cancer Institute Epidemiology and Genomics Research Program, which fosters the use of resources and technologies to advance cancer epidemiology and its translation into clinical and public health practice.

“Genome-Wide Association Study Identifies Multiple Risk Loci for Chronic Lymphocytic Leukemia” was first published in the journal Nature Genetics. It was the largest genome-wide association study of chronic lymphocytic leukemia, or CLL, ever conducted to identify common variants in human DNA called single nucleotide polymorphisms, which may influence susceptibility to this disease. This is the second time Skibola’s work has been honored by the NCI.

“This study was a culmination of many years of work with my colleagues in InterLymph, an international consortium of investigators working to identify the causes of lymphoma,” Skibola said. “We identified 10 SNPs that represent regions of our genome that may be important in the development of CLL. Interestingly, the majority of the regions that we identified that affect our chances of getting CLL pointed to genes involved in a common pathway which signals whether certain cells in our body live or die; this is an important mechanism to, among other things, eliminate cells with potentially cancer-causing mutations.”

Skibola says these findings provided important new insights into the biological relevance of this pathway in CLL and how CLL may be initiated. It also may be relevant in identifying new gene targets for CLL therapy, an area that Skibola believes will need further investigation.

Recruited to UAB in 2012, Skibola is one of many scientists studying genomics at UAB. A proposed research crescent can advance research capabilities in this area, as well as help recruit more researchers like Skibola who hope to cure not only cancer but diabetes, Parkinson’s and other diseases.