Crystal and James Burford wanted to add to their family as soon as possible after they married in 2014. Crystal, 39, had two children from a previous marriage, but James, 41, had yet to have any biological children.

“We wanted at least one child together,” said Crystal, a Trussville resident. Her pregnancy had been smooth until her five-month anatomy ultrasound, when the physician noticed something wasn’t quite right.

“The physician kept telling us she couldn’t get the baby to cooperate and turn the right way, and she really couldn’t image some portions of the heart, but she had her suspicions something was wrong,” James said. “That’s when the idea was floated out that it might be hypoplastic left heart syndrome. On a follow-up exam, they determined that it was.”

Now Crystal and James are eight weeks from welcoming Jeremiah James (J.J.) Burford into a world in which the only certainty is that he will be fighting for his life from the moment he arrives. A team of University of Alabama at Birmingham and Children’s of Alabama physicians, nurses and researchers are caring for the Burfords and J.J., who will be one of approximately 960 babies born in the United States with hypoplastic left heart syndrome this year, according to the Centers for Disease Control and Prevention. The cause for hypoplastic left heart is not known.

Crystal and James are allowing UAB News to follow their journey to their April 8 due date and beyond, in part to bring awareness to a condition for which there is not much support available on a national level. 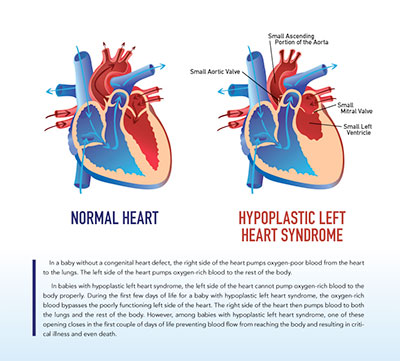 Click to enlarge“Other than one website we found, there isn’t a large support system nationally for hypoplastic left heart,” James said. “I would love to have more information nationally for other folks, so that if they’re going through this, they can have a greater sense of support.”

UAB’s Division of Maternal-Fetal Medicine physicians, who are housed in the Department of Obstetrics and Gynecology, are nationally recognized and specially trained in the diagnosis and management of obstetric, medical and surgical complications of pregnancy, including those of the baby. And Children’s of Alabama and UAB’s Pediatric Cardiovascular Services are leaders in comprehensive pediatric and adult congenital cardiac care. These multidisciplinary teams will work together to provide care for the Burfords.

“The doctors and caregivers here have been really good to us so far,” Crystal said. “They’ve explained things better than anything we’ve read. I couldn’t ask for better care. When I’ve told people we’re going to have the baby at UAB and spend time in Children’s Hospital, they say, ‘You’re in the best place. You’re so lucky that you live close to where you can use these hospitals.’”

What does it mean to have a hypoplastic left heart?

In babies with hypoplastic left heart syndrome, the left side of the heart cannot pump oxygen-rich blood to the body properly. The oxygen-rich blood bypasses the poorly functioning left side of the heart during the first few days of life. The right side of the heart then pumps blood to both the lungs and the rest of the body. However, among babies with hypoplastic left heart syndrome, one of these openings closes in the first couple of days of life and prevents blood flow from reaching the body. This results in critical illness and even death in some instances.

“There are many types of heart defects, but this is one that really needs to be diagnosed prenatally if possible because these babies need to be born in a center where they can be cared for very soon after they are born,” said Richard Davis, M.D., physician and professor in the Department of Obstetrics and Gynecology in UAB’s Division of Maternal-Fetal Medicine.

“The ductus arteriosus is a blood vessel that goes from the pulmonary artery to the aorta,” said Waldemar Carlo, M.D., pediatric cardiologist at Children’s of Alabama and assistant professor of cardiology in UAB’s Department of Pediatrics in the School of Medicine. “This blood vessel normally closes a few hours after birth, or up to two to three days after the baby is born. However, it is very important to keep this blood vessel open in hypoplastic left heart babies because the aorta is smaller and the blood is bypassing the left ventricle for the most part. That blood vessel needs to stay open to get blood circulating to the body.”

How is hypoplastic left heart treated?

While hypoplastic left heart syndrome is not correctable, some babies can be treated with a series of operations, which is the current plan for J.J.

The operations are complex and come at great risk. However, they are needed to increase blood flow to the body and bypass the poorly functioning left side of the heart. The surgeries are designed to make the right ventricle the main pumping chamber to the body.

Surgeries are performed in three separate stages. The first is the Norwood Procedure, which typically takes place in the first three to seven days of life. Surgeons will create a new aorta with this procedure, connecting it to the right ventricle along with a tube from either the aorta or the right ventricle to the pulmonary arteries supplying the lungs.

The second surgery, known as the bidirectional Glenn, usually is performed when the infant is 4 to 6 months old. It creates a direct connection between the pulmonary artery and the vessel returning oxygen-poor blood from the upper part of the body. It is designed to reduce the work the right ventricle has to do by enabling blood returning from the body to flow directly to the lungs.

The Fontan Procedure, the third surgery, usually is performed between the ages 2 and 5. In this procedure, surgeons connect to the pulmonary artery and the vessel returning oxygen-poor blood from the lower part of the body, enabling the rest of the blood coming back from the body to go to the lungs. Oxygen-rich and oxygen-poor blood no longer mix in the heart once this procedure is complete, and the child’s skin will no longer look bluish — a common symptom for the child after his or her first few days of life.

Infants who have these surgeries are not cured, and they may have lifelong complications. If the hypoplastic left heart syndrome defect is very complex, or if the heart becomes weak after the surgeries, a heart transplant may be needed. 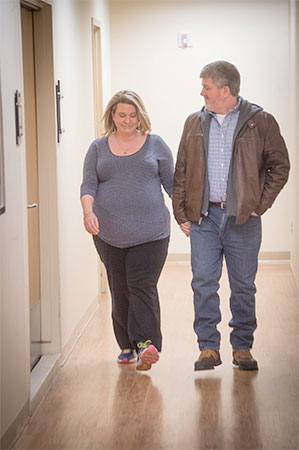 The Burfords know the road before them and for little J.J. is going to be challenging. They both have concerns any would-be parents have upon hearing their child will be born with a chronic condition. James, an avid football fan, laments that his son may not be able to play touch football with his siblings or neighborhood friends. He’s also concerned about the high risk of infection J.J. faces with a compromised immune system; it means Crystal will likely have to quit her job and stay home, because putting J.J. in day care would be especially dangerous.

Of course there are other fears that neither of them have control over and are perhaps the most frightening of all.

“My biggest fear is him going through pain and having to be operated on at such a young age,” Crystal said. “It’s very scary for a mother to think her newborn baby is going to have major surgery on his heart. I wish I could take that away from him. I wish I could be the one to go through it and not him.”

While both acknowledge their fears for what is ahead, they also are thankful and hopeful.

As Davis points out, when he began practicing 38 years ago, a hypoplastic left heart baby had a near 100 percent mortality rate. Now, that’s closer to 25 percent in the first year of life. Part of the reason for this reduction in mortality is that it is diagnosed when the baby is still in the mother’s uterus.

“I’m grateful we didn’t find out about this on the day of his birth,” Crystal said. “I can’t imagine how devastating it would be for somebody to have to deal with that on the day her child is born. At least we can prepare ourselves, educate ourselves and have a plan in place.”

Hope for the Burfords also is real. They know other families have experienced this and done well. And James is an optimist by nature.

“I know the world is full of opportunities and possibilities, and I’m sure J.J. will be able to do just fine,” James said. “He’ll be able to find something he’ll enjoy and like to do. I just hope he doesn’t feel limited. I don’t want him to feel that way. I want him to know he has as much possibility as anybody else.”

Crystal’s hope comes from finding “normal” through her 10-year-old son Isaac, who was diagnosed with type 1 diabetes at age 5. Through trials, successes and failures, they have managed his chronic disease, and he is thriving.

“I know Isaac’s situation is different from this, but any chronically ill diagnosis is tough to swallow,” she said. “Isaac’s diagnosis was very hard to deal with in the beginning; but we got our routine down, and it became our normal. My hope is, even though this is very scary right now, we will eventually reach a point where we have a normal.

“My hope is that James and I will be very good parents to J.J. and do the best we can by him and give him the best life possible.”