by Beena Thannickal
UAB’s Karan Singh has been selected as an American Statistical Association Fellow and recognized as a foremost member in the field of statistical science. 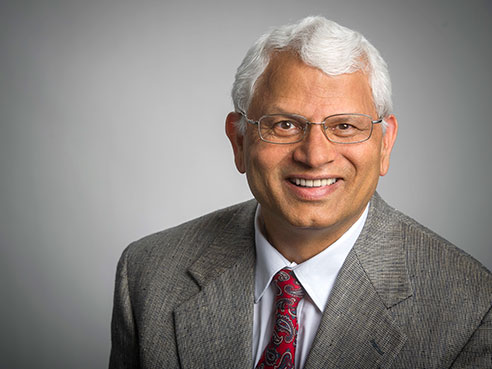 Karan Singh, Ph.D., professor in the University of Alabama at Birmingham Division of Preventive Medicine and director of the UAB Comprehensive Cancer Center’s Biostatistics and Bioinformatics Shared Facility, has been named a fellow of the American Statistical Association, the nation’s pre-eminent professional statistical society.

To be recognized as an ASA Fellow, each honoree must make outstanding professional contributions to and have exhibited leadership in the field of statistical science.

Singh was honored for excellence in statistical consultation, applications and research, particularly in health and medical-related disciplines, for outstanding leadership in establishing a department of biostatistics and managing research centers, for exemplary effective collaborative interactions with the medical community, and for dedicated service to the profession.

“I congratulate Dr. Singh on being honored as a new ASA Fellow,” said David R. Morganstein, president of the ASA. “His accomplishments have contributed greatly to the advancement of statistical science and have rightfully earned him the respect and admiration of his ASA peers.”

The ASA is the world’s largest community of statisticians and the second-oldest continuously operating professional society in the United States.

Singh will be awarded a certificate at a ceremony Aug. 11 at the 2015 Joint Statistical Meetings in Seattle, Washington.