Sorge honored as a young leader in the field of pain research and neuroscience by national organization.
Written by: Katherine Shonesy
Need more information? Contact us 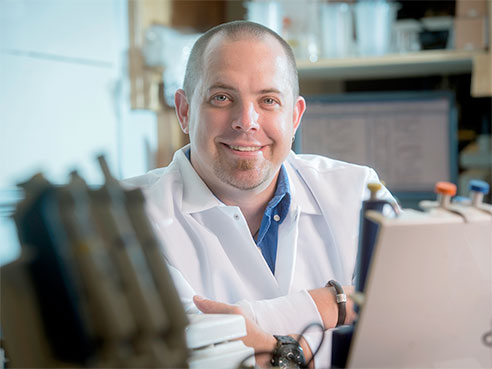 Robert Sorge, Ph.D., was named one of seven Rita Allen Foundation Scholars for 2015. Sorge is an assistant professor in the College of Arts and Sciences’ Department of Psychology at the University of Alabama at Birmingham.

The Rita Allen Foundation Scholars program supports basic biomedical research in the fields of cancer, immunology and neuroscience. Scholars are early-stage investigators and leaders in their respective fields who are advancing our understanding of the human condition.

Sorge’s research is primarily in the field of neuroscience, specifically focused on pain. His lab explores the interplay between addiction and pain, as well as the role of the immune system in pain sensitivity. As a scholar in pain research, Sorge will be granted $50,000 per year for up to three years to support his work.

The Rita Allen Foundation Scholars program has supported more than 140 scientists since 1976. The program embraces innovative research with above-average risk and groundbreaking possibilities. Scholars have gone on to win the Nobel Prize in Physiology or Medicine, the National Medal of Science, the Wolf Prize in Medicine, and the Breakthrough Prize in Life Sciences.

“By investing in outstanding biomedical scientists at the early stages of their careers, we are providing resources to these scholars to pioneer new approaches and discoveries,” said Elizabeth Christopherson, president and chief executive officer of the Rita Allen Foundation. “Researching basic biological questions is essential to improving human health and alleviating suffering caused by cancer, chronic pain, mental illness and other maladies.”

Sorge joins a prestigious class of scholars, with other recipients representing Columbia University, the University of Pennsylvania, New York University and others.