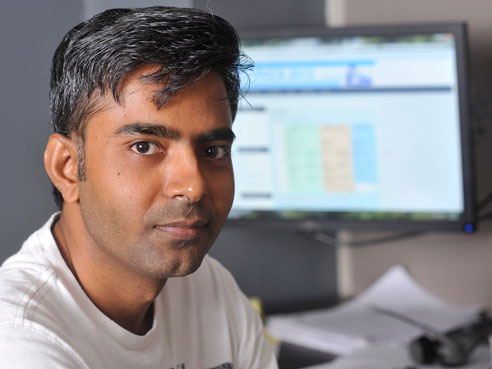 Nitesh Saxena, Ph.D., has been awarded two grants in 2015 from the National Science Foundation to continue his research in computer and network security.

The first of the two grants, a collaboration with Syracuse University, will help Saxena develop a secure and easy-to-use mechanism for user authentication in current-generation smartphones. Because they are in near constant use, mobile phones can be much more difficult to secure than traditional devices such as desktops or laptops. Saxena’s research will look into a way to constantly protect the smartphone. The project seeks to leverage several collaborating wearable devices, for example a smartwatch or smartglass, and their different sensors to build a strong behavioral biometric authentication mechanism that can recognize the legitimate user of the smartphone transparently and continuously.

The second grant, a collaboration with the University of California, Irvine, will assist Saxena’s team in furthering his research into improving the security and usability of two-factor password authentication systems. Saxena aims to design and implement two-factor authentication systems that improve upon previous, weaker systems by ensuring they protect against online attacks, as well as phishing attacks and offline attacks. Importantly, in doing this, Saxena’s design will not minimize the usability component of the authentication system and thus remain amenable to real-world deployment. This project has been supported by UAB Information Technology.

Saxena, the director of the Security and Privacy In Emerging computing and networking Systems (SPIES) lab and associate professor of computer and information sciences in the College of Arts and Sciences at UAB, is focused on a field of research that includes mobile and wireless security, and usable security. He has received several prior grants from NSF as well as from many industrial tech giants including Google, Comcast and Cisco.