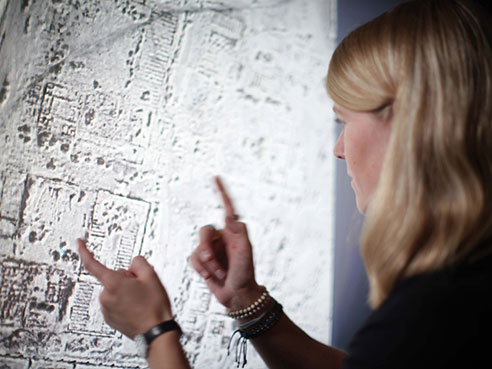 Parcak uses satellite imagery to map and identify ancient sites around the world that were thought to be lost forever. Sarah Parcak, Ph.D., associate professor in the UAB College of Arts and Sciences Department of Anthropology, has been selected to receive the Capo Circeo Award.

The Premio Europeo Capo Circeo was established in 1977 by the Association of German-Italian Friendship to recognize thinkers, politicians, writers, artists and others whose work or initiatives contribute to the promotion of the cultural, scientific, social and political heritage of European nations.

Parcak, along with two other archaeologists, was selected in recognition of archaeological discoveries of “exceptional importance to the Euro-Mediterranean world in recent decades.”

As an expert in remote sensing, Parcak uses satellite imagery to map and identify ancient sites around the world that were thought to be lost forever. Parcak’s work has provided valuable help to researchers engaged in different archaeological stations along the border of the ancient Roman Empire in Tunisia. Satellite imagery has led to the discovery of castles and military districts belonging to the Roman army, an amphitheater, and the likely location of the famed Portus Lighthouse.

Parcak’s use of infrared satellite imaging has resulted in the discovery of 17 lost pyramids as well as more than 1,000 tombs and 3,100 ancient settlements in Egypt. Parcak’s travels and discoveries have been the topic of documentaries by the BBC, the Discovery Channel and National Geographic. She is a 2012 TED fellow and National Geographic fellow and founding director of the UAB Laboratory for Global Observations. Parcak is the author of the first textbook on the field of satellite archaeology, Satellite Remote Sensing for Archaeology.

The director of the American Academy in Rome accepted the award on Parcak’s behalf during a ceremony Oct. 30 at the Musei Capitolini in Rome, Italy.